One night. One house. One Island. Everything changes for a lonely man and three delinquent kids. Three teenagers on the run, break into an empty holiday home on Auckland’s stunning Waiheke Island. It’s party time for the siblings until the owner unexpectedly arrives home, is knocked unconscious, and one of them is seriously injured. An unlikely bond forms as they attempt to get off the island.

Low budget and local all too often translate to what’s basically a TV movie bunged up on the big screen. In his feature debut, writer/director Paolo Rotondo deftly avoids all the usual clichxc3xa9s and pitfalls, cleverly keeping the action largely confined to a home under siege, and delivering that rarest of micro-budget gems xe2x80x93 a real honest-to-the-moniker movie.

Hanelle Harris, Jesse-James Rehu Pickery, and Calae Hignett-Morgan are never less than convincing as the tearaway teens, escaping the Auckland mainland to hang out, shoplift and purse-snatch on Waiheke Island, before breaking in to an upmarket house to raid the drinks cabinet and graffiti the walls. The young acting trio bring a real sense of loving, if broken, family, and a palpable air of menace to the owner of the upmarket beachfront home they invade.

The politics of privilege and race, have and have-nots, may be contentious, but this is a New Zealand film with a wider underlying message about whanau that’s heartfelt and, ultimately, hits home. As the troubled delinquents tell their equally troubled captive: “You’re our family. We’re wards of the state – we’re everyone’s kids.” As the home owner turned hostage, Colin Moy quietly radiates the sense of a man broken by his spiritual burden. Tough, tense, realistic and rough, deliberately paced, and never shirking moments of silence, violence and, ultimately, reconciliation, Orphans and Kingdoms is a tightly scripted, sincerely acted, ably-directed/shot/soundtracked and edited example of a little film with a big heart, crafted with a care and commendable commitment that belies its humble budget and technical constraints. 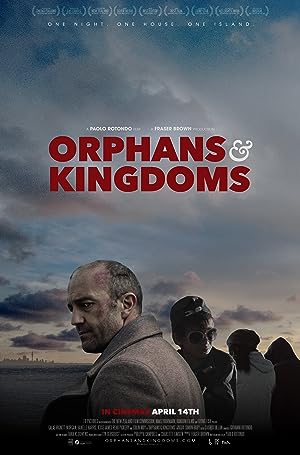