Juan, a young man convicted of terrorism, is given amnesty from a Lima prison; he boards a bus to return home and, in his mind’s eye, recalls events in his village near Huaraz when he was 10 or 12. His father is long dead, his mother lives with Fermin, secretly a sympathizer with the Communist guerrillas in the hills. Town leaders are assassinated at night. When Juan discovers Fermin’s secret, Juan is spirited away to the guerrillas to learn Marxist slogans and how to fight. When the band decides to attack the town to avenge the death of a comrade, Juan must choose. There are no white hats on any side: critical thought without love of life bears no fruit, writes Erich Fromm.

Paloma de Papel, is a film that narrates the story of a boy living on the highlands of Peru and suffers the effect of terrorism in his community and is later kidnap by these terrorist and then forgotten by society after being taken by the police. Even though there are some mistakes in the direction, i think this movies has achieved to show the effect of terrorism, not in a historical way but in a some kind of metaphor. The acting of the main character was simply OK. But the preformance of the parents and the terrorist girls was great of not spectacular. I believe this movie is a great vision of Peru, the background with the highlands is simply impressive and it makes Peruvians really proud of our country. Latin people should see this movie because we have been affected by terrorism, and other: European and US should also see it to appreciate the greatness of Latin America and Peru. 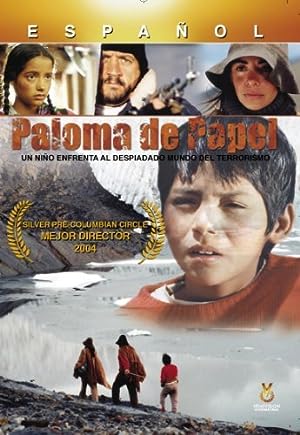 Paper Dove (2003)
90 min|Drama|25 Sep 2003
6.8Rating: 6.8 / 10 from 266 users
Juan, a young man convicted of terrorism, is given amnesty from a Lima prison; he boards a bus to return home and, in his mind's eye, recalls events in his village near Huaraz when he was …
Director: Fabrizio Aguilar
Creator: Fabrizio Aguilar, Gianfranco Annichini (contributing writer)
Actors: Antonio Callirgos, Eduardo Cesti, Aristóteles Picho, Liliana Trujillo