A small quiet place in Thuringia. Andreas’ (42) workshop is running well again and Martin (43) is not as much on the road as before. Son Max (19) is out of the house. Finally, the two have more time for themselves and travel in November to the Baltic Sea – as they have always done it before. But Martin is dissatisfied: the weather is bad and he would have preferred to stay at home. Andreas tears off his clothes and throws himself into the cold sea. Full of care, Martin tries to pull him back and swallows the salty water as he stumbles. Back in their holiday home the mood is disturbed by the different expectations. A cautious approach to the traces of a long relationship. Paths tells the love of two people. Not how they got together, not a period that they live through, but their day-to-day-life: all the years between the first kiss and now.

A rare film, a mature film…from one so young!

It will resonate with a fair few…for those who are in [or who have been in] a long-term relationship and realised that through no fault of either party…it has ran its course! There’s no love lost, there’s still respect, there will always be a shared history…but, when the time has come, when clinging on becomes…obsolete.

There are two ways to accept this finality…thankfully, Mr Miera has chosen the graceful path…capturing that moment when a couple decide to separate before the rot sets in.

There’s no melodrama, there just quiet reflectons of the happier times and the not-so happy times…of a shared existence.

At a certain age, it takes guts to walk away from stability, it takes guts to accept the inevitable. Sure, there are ways to avoid this inevitability…the post-modern ‘open relationship’ is always a ‘workable’ option…but, Martin and Andreas are old-school middle-agers. They know that these modern ‘option’s are not the answer. Too much respect for each other!

This is a gentle reconciliation on separation, there are a few tears…nothing tumultuous and that’s the film’s power…its dignity.

Younger men may learn from it, older men will reflect upon it…a rare, mature, beautiful film…from one so young and talented! 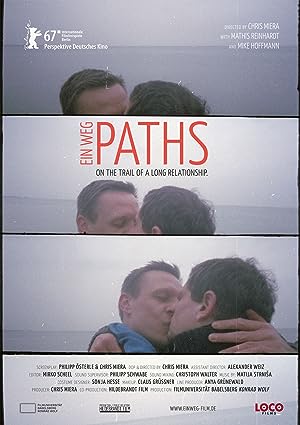 Paths (2017)
107 min|Drama|11 Jan 2018
5.7Rating: 5.7 / 10 from 323 users
How long is an eternity? A few years or just a breaking of the waves at the rugged Baltic coast? Andreas and Martin share all the ups and downs of life, and their son is maturing. A cautious approach to the traces of a long relationship.
Director: Chris Miera
Creator: Philipp Österle, Chris Miera
Actors: Mike Hoffmann, Mathis Reinhardt, Cai Cohrs, Tom Böttcher