Home » Non-English with Subtitles » Pauline at the Beach 1983

Fifteen year old Pauline and her older cousin, model-shaped Marion, go to the emptying Atlantic coast for an autumn holiday. Marion ignores the approaches of a surfer and falls for Henri, a hedonist who is only interested in a sexual adventure and drops her soon. Pauline’s little romance with a young man (Sylvain) is also spoiled by Henri.

Pauline just manages to keep her place in the center of this film, and how nice that is. Her indecisive cousin, a Rohmer type, almost takes over the film with a great figure. The two men are as unreliable as Rohmer’s men always are. Pauline, though, is just the acute teen age observer that one can really love. Her boyfriend shows a lot of rectitude too.

This film is a kind of testament to whatever it is in teenagers that makes most of them survive fairly intact, incredible though that survival may be in retrospect. A sweet Rohmer film, and my favorite.

A cute touch is Pauline’s two bathing suits – the one that is barely there shows the gawky but unselfconscious teen ager she is, and the modest one suggests the sexy woman she will soon decide to be.

Rohmer’s work, even more than most good directors, is a series of essays on a single theme. This one gives more hope that women and men may be able to live together than most of the others do. Still I think Rohmer remains puzzled about how the sexes coexist. 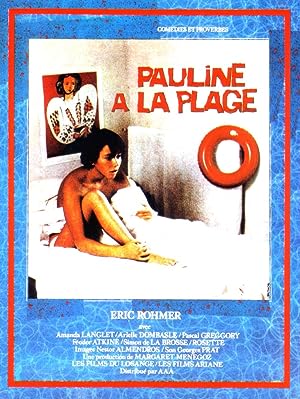 Pauline at the Beach (1983)
95 min|Comedy, Drama, Romance|23 Mar 1983
7.4Rating: 7.4 / 10 from 5,789 users
Marion is about to divorce from her husband and takes her 15-year-old niece Pauline on a vacation to Granville. She meets an old love…
Director: Éric Rohmer
Creator: Éric Rohmer
Actors: Amanda Langlet, Arielle Dombasle, Pascal Greggory, Féodor Atkine