Young Trevor McKinney, troubled by his mother’s alcoholism and fears of his abusive but absent father, is caught up by an intriguing assignment from his new social studies teacher, Mr. Simonet. The assignment: think of something to change the world and put it into action. Trevor conjures the notion of paying a favor not back, but forward–repaying good deeds not with payback, but with new good deeds done to three new people. Trevor’s efforts to make good on his idea bring a revolution not only in the lives of himself, his mother and his physically and emotionally scarred teacher, but in those of an ever-widening circle of people completely unknown to him.

Life is full of inconsistencies, and it is not without a sense of irony. There are people that have tried to make a difference in life and some of them have paid for it with their lives. Some that come to mind are Martin Luther King Jr, JFK, Gandhi and Terry Fox. It’s not easy to change the world. It takes a lot of hard work and determination. And it doesn’t happen overnight. But then you see a film like this and you begin to question that rationale. What if a concept like this really was implemented? What if every single person that had a favour bestowed upon them was asked to pay it forward? Is it possible that a Utopian world could be achieved? I doubt it, but it certainly would go a long way to making this condemned world a better place to live.

I don’t think this is one of the best movies that I have ever seen. I don’t think it is even the best film that I will see this year (although it will make my top ten ) but the idea behind it is what has me intrigued. Believe me when I tell you this. I don’t think I have ever been as emotionally galvanized as I was in this film. There is a raw power, a truth that rings clear in Pay It Forward and if there was one film that I would want people to see this year, it would be this film. It is entertaining, it is superbly acted, and it the one true film, the one true idea that really could help make a positive and tangible difference in our society and our world.

In some circles this film has been criticized for laying on the fluff. It is too much like a soap opera. And that is so far from the truth. Let’s recount the issues at hand and examine them. Kevin Spacey plays a burn victim because of child abuse. Helen Hunt plays a single mom that is having a hard time recovering from alcoholism and has a bad case of “can’t get her ex-husband” out of her life and her bed. Haley Joel Osment plays a wise beyond his years son that had to grow up precociously because of his mother that suffers from the above. Every character in this film, including the bit players suffers from real problems. If people have a hard time understanding this then just go to an average suburban classroom in North America and arbitrarily pick out ten kids. Chances are you will find cases of alcoholism, child abuse, divorce and a plethora of issues that are not conducive to a healthy environment for a child. So this film is just mirroring life. That’s all.

The performances by the three leads is nothing short of brilliant. Not as much can be said for the rest of the cast, but Spacey, Osment and Hunt all could be nominated this year when March comes. All three bring compassion and depth to the three scarred people that they portray. But especially intriguing is Osment. He doesn’t need to say anything in order for you to understand him. It’s a look, a twitch, a smile, a shiver. Anything he does helps us understand who he is and why he is that way. Osment is one true gifted actor and I really don’t think he is going to fade away in the years to come like so many other child prodigies. This is the real deal. By following up Sixth Sense with a performance this real solidifies him as a true thespian.

If you have not seen this film for whatever reason, and its box office suggests most haven’t, then do yourself a favour and take a chance on it. Not only will it do you good, it really might help change you in some ways. And as Osment says in the film, maybe we may all see in some way that, ” the world isn’t really s**t.” 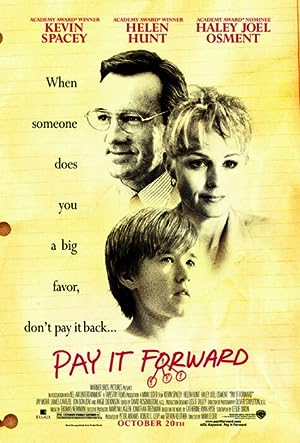 Be the first to review “Pay It Forward 2000” Cancel reply