Pablo, a shy teenager, meets Marco, who is a few years older than him. Together they go on a impromptu road trip to the Mexican desert, a trip that will make them face what they mean to each other. This experience will turn Pablo’s life around: his points of view, his strength and his own sexuality. Two guys and a video camera that will record their friendship, struggles and the possibility to find another destiny.

I do not want to write very much about this film, except to say that it is exceptional. The beginning is wonderful, where one of the actors plays like the child he still is. It is so perfectly done that it brings back memories of childhood. Then he meets the other boy, and the get to know each other and take the temperature of their friendship; the rest I will let you see for yourself. what is exceptional about this film is that none of the traditional Hollywood tricks is used here. The only thing which is presented, and why it works so well, is that the Director takes his time, letting the actors FIND the emotion as it slowly builds. it is so rare to see a film where emotion finds its way, instead of being automatic and forced. This makes it so much more real than most of what one sees today – with music swelling in the background to tell us what we , the spectators, should be feeling. In other words, in this film, it gives everyone the time to feel; instead of telling us what to feel, it lets us discover …ourselves. 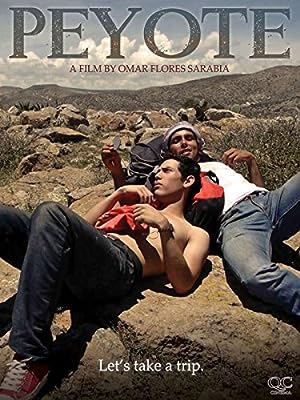 Peyote (2013)
70 min|Comedy, Drama, Romance|26 Nov 2013
5.9Rating: 5.9 / 10 from 233 users
Pablo, a shy teenager, meets Marco, who is a few years older than him. Together they go on a impromptu road trip to the Mexican desert, a trip that will make them face what they mean to each other.
Director: Omar Flores Sarabia
Creator: Sabdyel Almazán, Omar Flores Sarabia
Actors: Joe Diazzi, Carlos Luque