A story about a group of Russian boys who have lost their fathers in the World War II.

Nothing spectacular here, but quite interesting and very well done in spots.

This is a film primarily about children–namely Russian boys who have lost their fathers in the Great Patriotic War (i.e., World War II)–but it ends up being anything but a conventional children’s story.

Gubenko (who wrote, directed and acted in the film) is far more interested in conveying the mood of those disheartening and depressing years in the late 1940’s (which turned out so tragically different from what most Soviet Russians had been expecting) than in connecting all of the dots in the storyline. This ends up working rather well, because the film has a tendency to move in directions you’d like it to, dwelling on certain moments while skipping rather rapidly through others (or treating them elliptically).

In addition to dealing with the childhood years of the protagonist, his siblings, and his fellow “podranki” (a word, by the way, which is very hard to translate successfully into English–“orphans” is too generalized and weak; better is the term “wounded birds,” since these young boys really do face serious obstacles preventing them from “flying” normally into the future–plus it is no accident that the film makes plentiful use of birds, particularly rooks, as backing imagery throughout), the film also has somewhat brief “present-day” segments (i.e., taking place in the mid 1970’s) involving some of the characters as adults. One would always like to see more of Georgi Burkov–but short as his scene is, he comes through as always, playing the protagonist’s disillusioned and broken convict brother.

In certain ways “Podranki” can be compared to Tarkovsky’s 1975 film “Zerkalo” (“The Mirror”)–and many aspects of the baroque music, the sets, the moods (and even some of the episodes themselves) here seem to have been directly influenced by Tarkovsky. Both films also of course deal with fathers who are missing because of the war. But “Podranki” is not nearly as complex or difficult–for example, the switches between the 1940’s and the 1970’s here are always easy to follow (whereas it can take quite awhile to recognize the dual characters and time periods in the Tarkovsky). In fact, I would actually recommend “Podranki” as a good preparation for approaching “The Mirror.”

“Podranki” is not a world classic by any means, but it is a must for those who have come (like me) to love Soviet cinema. It will also be extremely useful for people seeking to learn more about the effects of WWII on Soviet Russia (though there are some serious improbabilities in this film, such as the gargantuan Nazi in the POW camp “getting fat,” as one of the characters asserts, “on Soviet food.”). And while this is indeed very much a film about childhood, it is by no means a film *for* children. 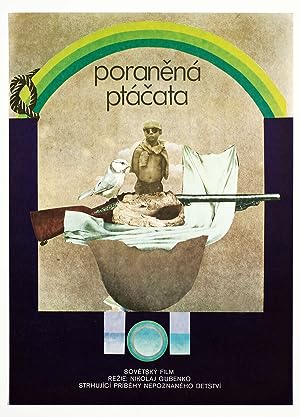