Bath time conversations between Ester Martin Bergsmark and the writer Eli Levén together with the story of Pojktanten – a fantasy world that centres on a person caught between two genders who creates a third in order to survive.

Being “trans” means not matching one’s physically or genetically assigned gender; both Leven and Bergsmark identify as trans and share memories of the violence and cruelties they experienced growing up as an in-between person. Much of their discussion unfolds in voiceover as they languidly pose naked together in an old-fashioned bathtub, shaving each other’s legs.

Exploring the interaction between who a person wants to be and what they are expected to be, Bergsmark stages stylized versions of a fantasy world, showing a person caught between two genders who creates a third in order to survive. One strand, shot in brightly saturated color, shows a young boy stealing away to a private space, putting on makeup and dressing as a girl, then dancing wildly in what looks like some sort of sexual abandon. Another features soft-focus shots of an older figure, dressed in trailing women’s clothing, moving slowly through a field.

References to St. Sebastian also abound, including shadowy night scenes of a thin, androgynous person in female attire going into the woods with a beefy older man, who produces a large knife and ties the other to a tree. Sebastian is also the name of Leven’s alter ego in his literary prizewinning novel “You Are the Roots That Sleep Beneath My Feet and Hold the Earth in Place,” passages of which he quotes during the film.

Black-and-white homevideo footage of a younger Leven reveal that he has long made his struggle for identity public. The Swedish title, “Pojktanten,” comes from the trans identity he crafted, and translates roughly as “she male” or “lady boy.”

Mixing digital formats of variable quality, the craft package has a handcrafted look that suits its experimental nature. A 10- 15-minute trim would improve the pic’s assembly. 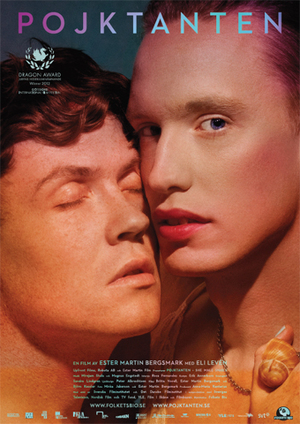 Be the first to review “Pojktanten 2012” Cancel reply