A stylish, sexy film about a young man’s journey into an unusual form of escort work, set in an imaginary vision of London’s Soho.

Postcards from London is perhaps not the film you anticipate it to be, and in fact it is as far removed from lead actor Harris Dickinson’s last film, Beach Rats, as it is possible to be. In a highly stylised and imaginary realisation of London’s Soho, we meet Jim (Dickinson), having recently moved to the big city, he stumbles across a group of rent boys. Rather than a seedy profession, this group pride themselves on their intellect and their ability to hold conversation about art and history, after the liasons have taken place.

To call this film unusual is something of an understatement, and for all its ultimate faults, it does at least offer something a little different. For those with a palate for the unusual, the freaky, and the downright surreal, then this may be the film for you. On a purely visual level, this film is incredibly striking; its perma-neon drenched settings giving the impression of a fever dream, a whirlwind of visions and hallucinations with no clear indication of what is real or not.

After impressing in Beach Rats, Harris Dickinson also makes for a compelling lead in Postcards, proving he can do the more light-hearted and freewheeling as well as the moody and brooding; there are undoubtedly big things ahead for this young actor.

Postcards from London feels like a film on acid, and what it has in visual spectacle, it lacks in thematic reasoning and coherence. It focuses on the torture of an artistic mind, being pulled between participating or observing, and this feels incredibly detached from the sex-work subplot.

At times it feels like it is trying to say something interesting about this marriage of art, sex, and the subculture that embodies them both, but it never lands any of its initial promise. It is confusing, tonally all over the place and never offers reason or conclusions to its ideas.

Perhaps the film is in itself trying to imitate art; opinions of this film (as art) will vary wildly but all art is subjective. To try and quash the creative intentions of the director and the storytellers would be doing them a disservice and whilst this film won’t be for everyone, it is still in some ways art, which some would still be able to appreciate, despite its flaws. 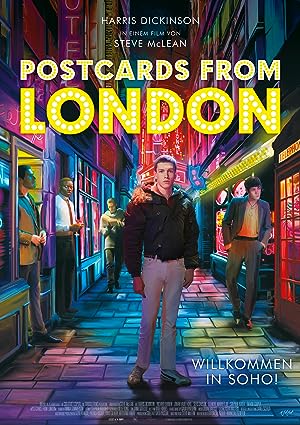 Be the first to review “Postcards from London 2018” Cancel reply