Frida is different. Marius, on the other hand is the most perfect boy in class. When they have to work together at school, it’s the start of a turbulent and challenging relationship. Generation Achievement meets impossible love.

Marius is a good boy. He’s good in school, he always does what he’s told and what’s expected of him. We as the audience are never exactly told if he’s happy with that, but we suspect that he’s not. In comes Frida, the new girl in school who, rumour has it, had tried to commit suicide. She’s the exact opposite, she never does what she’s told and shows some very rude behaviour. For a class project, a techer asks Marius to team up with Frida and although he’s not thrilled, he can’t say no., so he awkwardly tries to engage with Frida. Being strong-willed, Frida plays with Marius and makes him do things that are completely against his nature, even things that are forbidden. Not to spoil anything, you can guess that a teen romance eventlually leads to them falling in love, not without complications like the girl Marius used to date before he met Frida.

The core message of the movie is that our society wishes for children to be like Marius, but in order to be happy they need to develop their own character and do what makes them happy, even if it doesn’t always make their parents happy.

My main criticism is that both the characters of Marius and Frida were too extreme to be entirely credible, Marius too boring and Frida too impulsive, but I guess the director wanted it this way to drive home the “opposites attract” thing. My teenager days are long gone, but still I found the movie entertaining, the acting was solid and while I wouldn’t pay to see it in a cinema, the time watching it on tv was not wasted. Of course the movie is aimed at teenagers and parents with teenage children. 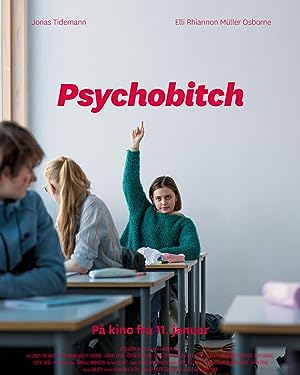 Psychobitch (2019)
109 min|N/A|11 Jan 2019
Rating:
Frida is different. Self chosen different. Marius, on the other hand is the most perfect boy in class, and likes to show off. When they have to work together at school, it's the start of a …
Director: Martin Lund
Creator: Martin Lund
Actors: Henrik Rafaelsen, Elli Rhiannon Mxc3xbcller Osbourne, Jannike Kruse, Jonas Tidemann