This film is about Gils, a young boy (about ten) in a juvenile mental hospital in 1950’s France. Flashbacks recount his conflicts with authority and his strong relationship with Jessica, a similarly rebellious schoolmate. Simultaneously, a compassionate doctor develops a trusting friendship with Gils, which a higher-ranking authoritarian doctor tries to thwart.

This movie isn’t for people who expect action, or at least quick changes and big events. No dead people, even from natural causes (only one implied, but we never see him), no shooting, no weapon of any kind appearing on screen at all. No car races (we almost don’t see a car either), no policemen, detectives, soldiers.

Now, as the majority gave up reading this comment and probably watching this movie as well, just a few thoughts about “Quand…”. I didn’t understand the title. A boy tells (someone) his life story, and one of the first sentences is used as a title of the movie, but never repeated, explained or referred to at all. You better be ready to neglect it, otherwise expecting the explanation can hinder your attention.

Half of the movie contains present time (with no jumping) and the other half are flashbacks inserted during the whole movie, but more and more as the story develops. These flashbacks are also put in correct sequence, so there is no trouble to follow the movie. The only few moments when you can be confused belong to Gil’s (main character’s) imagination, yet they are short and at the end of the scene clearly separated from the reality (some in present time, some in flashbacks).

This is a romantic story about a love too great to be accepted by the others, especially older generations. It can be a prepubescent version of Zeffirelli’s “Endless Love”. The lovers in Zeffirelli’s movie are almost twice Gil’s and Jessica’s age, they are older teens, so they can be even more mad and wild, and the consequences of their actions can be more dangerous and tragic. But the destiny of young lovers is similar due to the adult’s reactions. And while we can understand parent’s reaction in “Endless love” when even their lives become endangered, we still know that it wouldn’t have happened if intergeneration relations had been more tolerate before. But David gets into institution quite late though his obsession had already shown signs of disturbed behavior. Gil in “Quand…” gets institutionalized at once when girl’s mother overreacts, and only then his disturbances start, and this is the moment when movie in fact begins.

Gil and Jessica are not ordinary kids. They are rather isolated from peers, but partially by their own will (we don’t see any bullying), and when they meet each other they find similar souls. Such kids can be very firmly bound to each other. Some sexual situation (like the one in the movie) can happen, but it comes out of love, loneliness, isolation and comfort. The other kids, especially those popular among peers, will probably wait some more years, but then will often practice unsafe sex to prove themselves, for fun or just because everybody does it.

We can’t blame Jessica’s mother too strongly, she has just lost her husband and is left alone with a daughter, so unexpected situation was too much for her. We must, however, be very unsatisfied that she didn’t change her mind when she had time to think and cool down, and didn’t reject accusations against Gil.

The life in institution, the doctors’ approach, treatment and disagreements remind me on a strong Italian drama “Il grande cocomero”. Anyone who likes “Quand…” will probably find “…cocomero” even better in showing the hospital life.

The photography has to be mentioned. Very dark in institution and a bit brighter in flashbacks, but almost never really free of shadows, except some outdoors scenes in ZOO or park (rare happy days). Gil and Jessica didn’t have enough light in their childhood. But there is one remark: it is often raining, and usually some 10 meters behind this heavy rain that our characters run or walk through you can see sunlight on the grass. Unusual is the way last flashback scene was made: no slow-motions we are so used to, no soft or misshapen lenses, but when Jessica’s mother comes home and gets shocked and disturbed, the camera is really disturbed too: scenes are shot with a very unsteady camera, some of them repeat, stop for a few frames, then continue, stop again, and it all lasts about one very impressive minute.

Conclusion: half of movie is a calm version of “Endless Love” with younger actors, and the other is a less dramatic tribute to “Il grande cocomero”. Is it worth watching? Oh, yes, definitely, and a must see if you have kids, ever plan to have them, and you forgot how it was like to be a kid yourself. 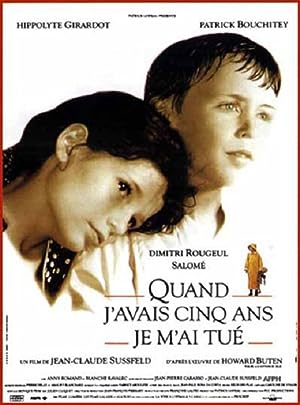