The film, adapted from the Eisner award nominated manga by Jiro Taniguchi, follows Thomas, a cynical and tired French comic artist who, while visiting his old family home, loses consciousness – only to awaken 40 years in the past in the body of his younger self. While here he faces the choice of changing events at the cost of his own future – and to unravel a lifelong mystery, the reason for his fathers mysterious disappearance that he knows will happen a few months after Thomas’s arrival.

this is still valid for European movies, and “Quartier lointain” is an example of this. alright, it is probably not the best movie ever, but the story has soul, even if the story is small, but life is knitted together with small stories like this.

the search for love, the feeling of something lost, the memory of past desires and forgotten anxieties, the wish to turn back time, the dreams of dreams…

a story moving in its own pace, no flashes and exaltations, just a fragment in the life, that should not be spent in vain 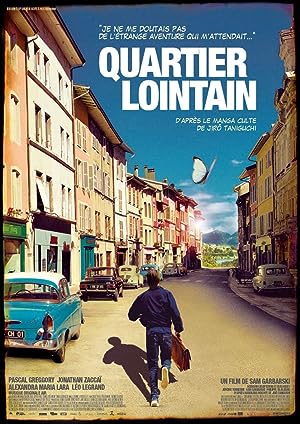