Querô is an orphan teenager, living alone near the docks in Santos, Brazil. His mother, a prostitute, died when he was a baby, and he was raised in the bordello where she worked. He also doesn’t know who his father is. Believing he rules his own destiny, he refuses to compromise with anyone else, the corrupt policemen always chasing him, the oppressive discipline in the juvenile institution Febem, or the drug dealers who try to lure him. But this independence has a price

The movie is about a teenager, Querô, who is raised by a pimp woman, owner of a whorehouse, after his mother died on childbirth. The old woman treats him badly and he doesn’t have the opportunity to get proper education.
To earn some money, and looking for some status, he enters the crime world. One day he is arrested and goes to the FEBEM, the old Brazilian prison for children and teenagers (the same of the Pixote movie).
The plot is interesting, and he suffers a lot, in a verisimilar way, but sometimes the dialogs are not spontaneous, not natural.
Mainly the Querô’s monologues are quite forced. The main character is a teenager without education, but still though he philosophize about life in quite an intellectual way, as if he were an experienced adult.
The actors are good and the movie is well directed, except by the fight scenes that are shot too close.
This movie gets 6 out of 10, but if you want to watch a masterpiece on the same theme, you must see “Pixote, a lei do mais fraco”. 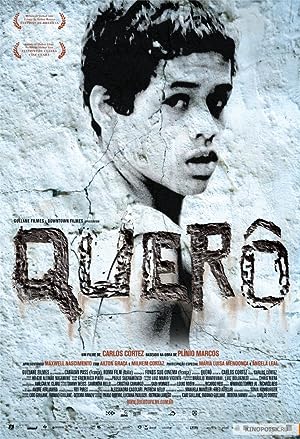 Querô: A Damned Report (2007)
88 min|Drama|14 Sep 2007
6.9Rating: 6.9 / 10 from 202 users
Querô is an orphan teenager, living alone near the docks in Santos, Brazil. His mother, a prostitute, died when he was a baby, and he was raised in the bordello where she worked. He also …
Director: Carlos Cortez
Creator: Luiz Bolognesi (script collaborator), Carlos Cortez, Bráulio Mantovani (script collaborator), Plínio Marcos (novel)
Actors: Leandro Carvalho, Eduardo Chagas, Milhem Cortaz, Nildo Ferreira

4 reviews for Quero 2007 with English Subtitles