Tia and her brother Tony have supernatural powers, can communicate and move things with the power of their minds alone. They arrive in Los Angeles, California from Witch Mountain for a visit. When Tony uses his powers to prevent an accident, he gets into the hands of Dr. Gannon, a ruthless scientist who’s constantly striving for power over the world. He puts a device near Tony’s brain that allows him to control Tony’s will. Tia gets help from a kids gang to free Tony and save the Earth.

I saw this film when I was about 10 years old and loved it. Now 30 years on, it is still one of my favourite films. I have just bought both ‘Escape to witch mountain & Return from witch mountain for my kids as they love it as well. They sure don’t make good old movies like this now.These films are a must when they are shown on TV. There are no swear words or violence which makes them suitable for all the family whatever the ages. Good family fun. My mum took me to the pictures to see this film and I always wanted to have ‘powers’ like Tony & Tia. Mind you the child in me still does. Perhaps thats why I have a passion for anything supernatural now. 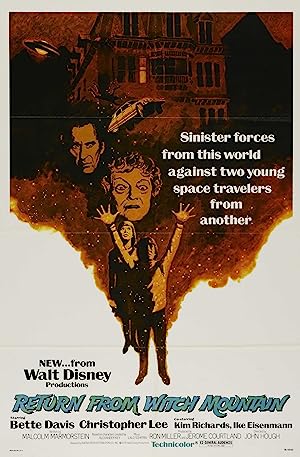 1 review for Return from Witch Mountain 1978