This movie is about a young boy Ruben in search of his homosexuality and experience harassment & violence from where the problems of acceptance begins. He found out his love for boys when he has a date with Mike. His parents and little sister don’t know about his struggle and harassment at school. This film is going to be used in education for acceptance of homosexuality and against violence

No teenager should ever be made to feel that being gay equates to taking their life. And yet the suicidal rate amongst the LGBT youth of today is alarmingly all too high. Thankfully many a filmmaker has tackled this issue head-on and this poignant short from director Thijs Verhoeven is another shining example of a short film with a big heart.

Written by Hans Arendshorst and complete with the telling closing theme Every New Day performed by fellow cast member Neil van der Hulst, this short, like the song itself questions – why is it such a big problem that people are sexually different? For star of the show Ruben is not like the boys in his class; for at heart he knows that he’s gay, only not out to his parents and little sister he seemingly has no-one to turn to for comfort and support. That is until an internet chat room encounter brings him in touch with Mike; a fellow teenager coming to terms with his sexuality. Meeting in person, both young men are finally able to express their innermost feelings for the first time. Yet life can be cruel and with news of their meeting spreading like homophobic wildfire in class, Ruben finds himself alone again. Tired of the incessant bullying and having to face the hatred of those around him, thoughts of suicide fill his head and of a railway track that appears to be his only way out of life at the end of lonely street.

Produced as an educational tool for schools to prevent homophobic violence towards gay teens, this is a work that whilst having some negatives in the critical mix, are ones that frankly I’m going to ignore, given the heartfelt message that it delivers. For this is a short film that speaks, if not shouts of love and acceptance; be it of your own sexual self, or that of the sexuality of those around you. It’s a message than cannot be said loud enough, given on a global scale and on average 3,000 people needlessly take their own lives every day. That’s a shocking ‘one person every 30 seconds’ statistic that thankfully works of this nature aim to address, one that here includes a tender scene between Ruben and potential boyfriend Mike that’s sure to become part of many a video montage. And whilst the ending on offer is upbeat, real life however all too often finds the lives of friends and family shattered forever by the pointless death of a loved one who just yearned for love and acceptance. That really isn’t too much to ask for in life, now is it. 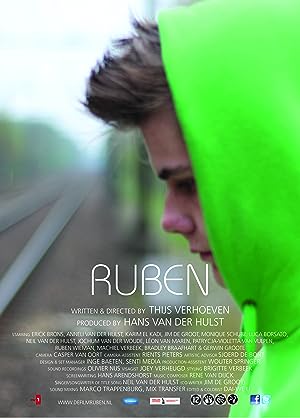 Ruben (2012)
N/A|Short, Drama|01 Sep 2012
7.2Rating: 7.2 / 10 from 24 users
This movie is about a young boy Ruben in search of his homosexuality and experience harassment & violence from where the problems of acceptance begins. He found out his love for boys when …
Director: Thijs Verhoeven
Creator: Hans Arendshorst
Actors: Erick Brons, Anneli van der Hulst, Jim de Groot, Monique Schutz

Be the first to review “Ruben 2012” Cancel reply