Calvin is a genius novelist who begins to type a new novel on his manual typewriter about Ruby, his dream girl. He can’t believe his eyes, because the next day, Ruby becomes a real person, and they begin to have a beautiful relationship together. If the relationship isn’t perfect, all Calvin has to do is simply type the words on the page and Ruby’s actions change to what he needs.

Motion Picture Rating (MPAA)
Rated R for language including some sexual references, and for some drug use

This is a movie that you can either love or hate, based on how you see it.

On one side, it is a fantasy movie with “Groundhog day” accents (no, the day doesn’t repeat again and again).

On the other side, it is a beautiful metaphor which if you recognize, it is impossible not to give it a 10. Not because it is perfect. It has charm but it is a bit slow paced at times and the execution is not amazing.

But rather because … it feels so familiar. It is one of those movies describing what we’ve done, what we’ve felt, like it is our story. It is a different setting, different people, different circumstances but it is our personal story, at least for a large majority of people.

It made me go over the plot holes and the “how the hell this can happen” type of scenes but rather, just think …

“Would I do the same?” and most importantly …

That’s why you should watch this movie.

The plot is not that important. The underlying message of this movie is. While I don’t like romantic comedies so much, I can place it next to two other movies “If I stay” and “Tres Metro El Cielo”. And while these two movies may seem as a “How to boost your estrogen level in 90 minutes” types of art, they also carry a very profound lesson. 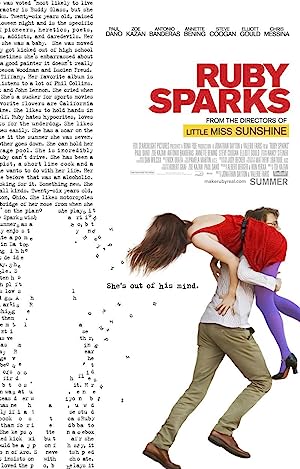 Be the first to review “Ruby Sparks 2012” Cancel reply