A modern day take on the trials and tribulations of dating. We follow Ben as he faces the world of dating as a 35 year old who is looking for more then sex. After testing out different routes and adventures, he stumbles across Grey. The chemistry between the two is instant, but what happens when you meet someone who doesn’t share the same beliefs about relationships that you do? This funny and touching film touches on relevant topics in today’s society including sexual monogamy, Serodiscordant relationships and can someone really have it all? Written by Ronnie Kerr, this film is an autobiographical look at his life.

I’m sorry, but as a gay man, I found this really, really bad. I mean, it’s offensive, it’s so bad. I feel sorry for anyone–especially inexperienced or young gay guys–who thinks that there’s anything authentic about any of this.

It’s fakey. The dialog is not only trite, it’s boring. When it tries to be funny, it’s cringe-making. But when the dialog is dealing with love, commitment, or just trying to show how two gay guys talk together, it’s just fake. It’s too writer-ish. People just don’t talk that way.

And that’s one of the big problems with this kind of movie. It’s people *talking* about life. It’s not a movie that *shows* people living a life. And if you’ve got a dialog-driven movie, you better have A+++ dialog or why bother?

It’s not that this movie doesn’t depict situations that gay guys deal with, it does. It’s just doing it really, really badly. 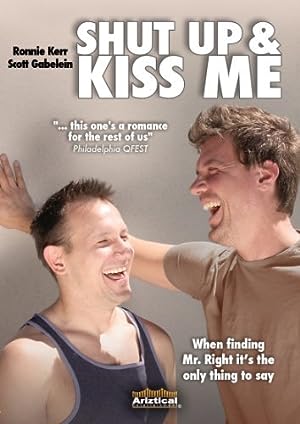 Shut Up and Kiss Me (2010)
78 min|Comedy, Romance|13 Jul 2010
4.3Rating: 4.3 / 10 from 382 users
A modern day take on the trials and tribulations of dating. We follow Ben as he faces the world of dating as a 35 year old who is looking for more then sex. After testing out different …
Director: Devin Hamilton
Creator: Ron Smith
Actors: Ron Smith, Scott Gabelein, Kindall Kolins, Joseph Russo