A sexy, romantic and uncomfortably chilling tale of love and deception from first time director Marcelo Briem Stamm. Handsome middle class Manuel (Patrico Ramos), hurt by his previous relationship and bored being alone, meets Julio (Mario Veron), a rugged, lonely, unemployed young man in a chat room. The two eventually meet up in person and the sexual spark is quickly ignited. And while sex is satisfying and frequent, it is their collective problems with intimacy, trust and the fear of being hurt that make them hesitant to commit fully. As their relationship develops, both reveal secrets from their past but these revelations might be real, imagined or outright lies. Who is being truthful, who is real, and who truly loves the other? All is revealed in this romantic, passionate drama/thriller that offers a shocking, strangely satisfying conclusion.

Honestly, when I first watched this film, somehow it’s a little bit boring. Well, I think this is a low budget film, the cast only 5 people and mostly 80% shooting only in the same room of an apartment.

But, I was surprise as the plot growing more complicated. The lead actor, Patricio Ramos as Manuel, played an innocent post-breakup gay and meet Mario Verón as Julio from online chatting. They have a different personality. Somehow, Julio look like the bad guy with tattoo and unclear past.

Interesting life in just one night stand. The whole plot only happened whole night with flash back sometimes. Sex made, emotion build and future planned. But the truth conceal when another truth reveal a lies. 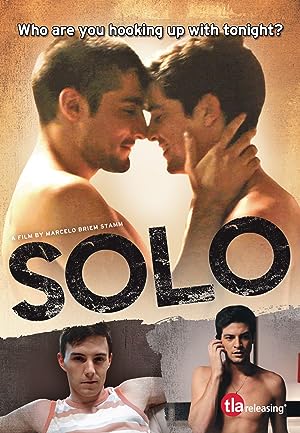 1 review for Solo 2013 with English Subtitles