It’s not easy to rebel when your dad wants to join the party… One day (in 1979), Magnus and his son Nikolaj hit the wall in their new terrace house in Rykkinn. Magnus is an architect, hippie and free spirit, a glaring exception in a community where equality and conformity is the norm. He always stands up for his son, supporting him unconditionally, even when Nikolaj decides to stop giving a damn. SONS OF NORWAY is a film about rebellion, punk rock, suburban hell and the struggle between freaks and punks. But most of all, it’s the story of an unusual father-son relationship, and about the strength of the bonds we sometimes do our best to rip apart.

I recently saw this at the 2012 Palm Springs International Film Festival where director Jens Lien was on hand at my screening for a Q&A following the film. The film is set in 1978 where Magnus (Sven Nordin) and Lone (Sonja Richter) are a new age couple raising two boys. Magnus is an architect by trade and is in a transition stage between being a hippy and a new age trend setter. His loving wife Lone puts up with his eccentricities and is the glue that keeps the family stable. A family tragedy propels the oldest son Nikolaij (Åsmund Høeg) into being a follower of the punk rock scene where he joins a band and rebels on the establishment of his hometown. Magnus goes through the family crisis on a different course following a nervous breakdown. This is a smart and funny comedy with a heavy sprinkling of drama to keep it on track. Norway has become known in recent years for the quirky comedy/drama films coming from there and this is a good example. Great directing by Lien from an excellent story by Nikolaij Frobenius. Fine acting performances from a great cast and nicely photographed by cinematographer Morte Søberg. Masterfully edited by Vidar Flatauken with a great score and sound this is a worthwhile coming of age film. Look for former Sex Pistols front man John Lydon as his alter ego Johnny Rotten in a cameo and a soundtrack featuring six original Sex Pistol classics. I would recommend this imaginative film and give it a 9.0 out of 10. 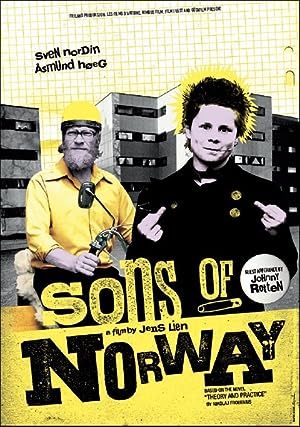