A futuristic, sensitive tale of adventure and confrontation when a 10 year old boy is accidentally kidnapped by a spaceship filled with a motley crew of space pirates.

The last time I saw this movie, I was 10… hence the high rating. If I were to go back, I’m sure I’d find plot inconsistency, A horrible budget. and a touch of B acting.

The stuff most classics are made of right?

Not for the serious movie watcher. But a diamond in our scifi portfolios for those who love sci fi in all of its shame and glory.

As a kid I watched this movie with films like Ice Pirates, The Last Unicorn, ET, Battle Beyond the stars (which was made by the same company), Star Trek 1-3, Indian Jones, Old School Battlestar Galactica, Buck Rogers, and even VOLTRON!

This movie is a part of my childhood. I played with Lego’s and built spaceships to have battles not unlike those in the movie right in my back yard five out seven days a week, the other two I was watching movies like this one.

It’s good stuff. Right up there with the animated version of Lensman. 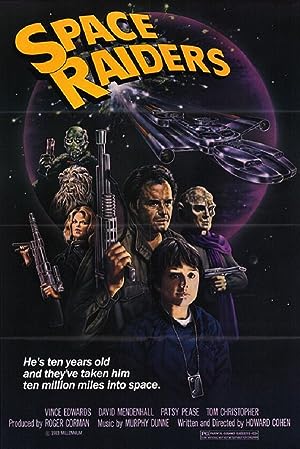 Be the first to review “Space Raiders 1983” Cancel reply