A guy is found by the police swimming naked. He can’t, or refuses to, speak and is sent to a hospital. Since no diagnosis can be made, he will be transferred to a mental hospital, when his male nurse decides to take another route. Slowly the reason for his speechlessness becomes clear. Together with the nurse’s girlfriend and a female friend of the silent stranger, their history is explained.

I enjoyed this movie. It is slow moving with depth of characters, and not so confusing from beginning to end once one gets to the end. Sad, yes, but understanding of the culture in Asia and when Europeans go there. But, I come from the perspective of a European who has lived for half a year in China and visits from now and then. Some of the other reviews have some remarkably uninformed comments. Like, one saying it is implausible that a French guy speaks English. Sorry, that would be perfectly normal in China, as it would be rare for Chinese to speak French, but less rare to speak English. Overall, not a large budget movie but one that gets into some meaningful depths of understanding and showing different aspects of life in a Mandarin speaking region via the mechanisms of a mystery. 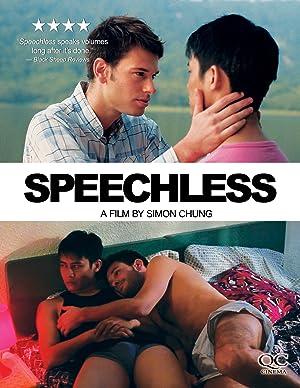 Speechless (2012)
92 min|Drama|30 Mar 2012
5.9Rating: 5.9 / 10 from 351 users
A guy is found by the police swimming naked. He can't, or refuses to, speak and is sent to a hospital. Since no diagnosis can be made, he will be transferred to a mental hospital, when his …
Director: Simon Chung
Creator: Simon Chung, Yulai Lu
Actors: Pierre-Matthieu Vital, Qilun Gao, Yung Yung Yu, Jian Jiang

1 review for Speechless 2012 with English Subtitles