Based on one of the most beloved Young Adult novels of all time: Two kids are stripped naked and left together on an island in a lake – victims of a vicious summer camp prank; But rather than have to return to camp and face the humiliation, they decide to take off, on the run together. What follows is a three day odyssey of discovery and self-discovery.

Based on Brock Cole’s “The Goats”, Standing up is the story of two geeky kids, a girl and a boy, who are the victims of a mean holiday camp prank. Stripped naked and left marooned on an island, the boy and girl are left to their own devices and decide to leave the camp and embark on an adventure on their own.

I like that the main characters are geeks and outsiders, and they are ably played by Chandler Canderbury and Annalise Basso. They are experienced TV actors despite their young age, and the chemistry between them is good. I certainly could identify with the awkward feeling of being a lonely young outsider searching for yourself and for companionship.

I like the general theme of the film, that you can learn from all your experiences, good and bad, and discover yourself as a result. I think this is a good message, especially for young adults. However, the world view is a bit too optimistic, the kids never really are in real danger despite their dangerous decision to live on their own for a few days, and the lack of any real antagonist means the film lacks an exciting edge.

Nevertheless, it is a good-natured film without nudity or swearing, and works well as family entertainment. Personally, when it comes to coming-of-age movies, I prefer Stand By Me. 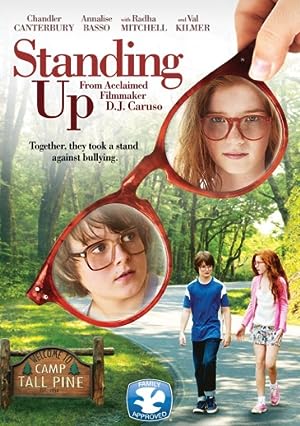 Standing Up (2013)
93 min|Drama|16 Aug 2013
7.0Rating: 7.0 / 10 from 2,856 users
Two kids befriend each other after being left stripped nude in a lake as the victims of an immature summer camp prank. They run away from camp and for three days learn more about each other than they've ever known before.
Director: D.J. Caruso
Creator: D.J. Caruso (screenplay), Brock Cole (novel)
Actors: Chandler Canterbury, Annalise Basso, Radha Mitchell, Val Kilmer