Finnish men in sauna, speaking straight from the heart.

Having read raving reviews about ‘Miesten vuoro’ (Steam of Life), which reportedly has reduced many viewers to tears, I expected much from this hauntingly beautiful documentary about Finnish masculinity, the sauna culture, and male vulnerability. The movie delivered everything I expected from it, and more; it’s a gripping, genuinely moving portrayal of the sensitive side of rough men who have been raised to hide their emotions.

The concept is rather simple; a variety of ordinary Finnish men talking about highly emotional moments of their lives in saunas. The men represent various different age groups and occupations, but in the context of the film their roles in the society are almost irrelevant. In the sauna, the men shed their clothes, social masks, and inhibitions, and bare the true, raw emotions behind their tough exteriors. Clothes and occupations can only tell so much about a person. The bare, life-shaped bodies of these men – some old and some young, some fat and some skinny, some well-built and others filled with scars – say so much more. And beneath both their clothes and their skins, the men are very much alike.

The stories the men tell vary between heart-warming and heart-breaking; they talk about parenthood and childhood, of friendship and marriage, of birth and of death. Many of the men talk about their children, and for me both the tragic and the happy stories of fatherhood stood out as the most touching scenes of the movie.

It’s very difficult to make a movie about such an emotional subject matter without being overly sentimental, but ‘Miesten vuoro’ manages to do just that. The scenes are very intimate, but also properly aloof. The beautiful score and gorgeous images of the rough wilderness and snowy cities support the emotional content perfectly without drenching the movie in needless sap. There are also splashes of tender humour scattered around the film, which makes it vibrant and balanced.

There’s something cathartic about watching the men open up, reveal their emotions, and wash themselves. It doesn’t take a genius to point out the metaphorical connection between emotional and physical purification through bathing and talking. It’s like a religious rite; in ‘Miesten vuoro’, the sauna is a place of meditation for men who cannot bare their hearts anywhere else. 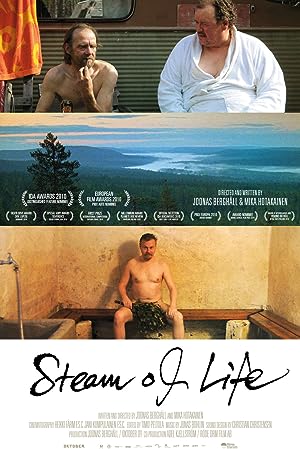 Be the first to review “Steam of Life 2010” Cancel reply