Still Walking is a family drama about grown children visiting their elderly parents, which unfolds over one summer day. The aging parents have lived in the family home for decades. Their son and daughter return for a rare family reunion, bringing their own families with them. They have gathered to commemorate the tragic death of the eldest son, who drowned in an accident fifteen years ago. Although the roomy house is as comforting and unchanging as the mother’s homemade feast, everyone in the family has subtly changed.

Few other nations can capture the beauty of family drama with such subtlety and grace as the Japanese can. Perhaps it is a blessed legacy left behind by the master Yasujiro Ozu who in his lifetime made over 50 films, all of which are family dramas that often dealt with generational gaps. Japan, more than any other nation struggles with the problem of generational gap, being a nation that has continued to endure conflict between the young and the old, the traditional and the modern. Stepping into Ozu’s shoes is the acclaimed director Koreeda Hirokazu, whose films “Nobody Knows” and “After Life” has already garnered universal praises.

“Still Walking” begins as a family reunites to commemorate the death of one of its members. With new members joining the family and old wounds resurfacing, everyone tries their best to pass the two day gathering with as little problem as possible. Sounds simple doesn’t it? Well, therein lies the plain and subtle beauty of the film. From a few words exchanged between the grandfather and his new grandson to the laughter of three children as they caress a blossoming flower, these simple moments will linger in your mind with tasteful resonance long after the film.

While watching the movie, I found it hard not to be immersed by the beauty of Japanese suburbia. I could picture myself – like the characters, taking a stroll on a simmering summer day with the cool breeze in my hair as the gentle picking of guitar strings play in the background. Or perhaps eating lunch and drinking cold ice tea on tatami mats as the wind-charm tickles with the slightest vibration. “Still Walking” is a meditation on life and death that may just move you to tears…without even trying. 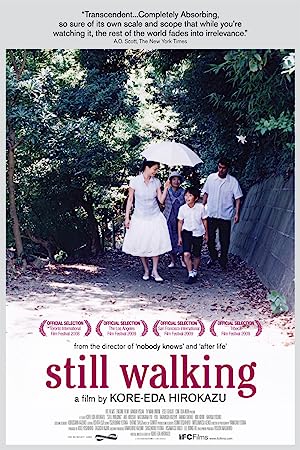