The clumsy and unfunny clown Richard “Stitches” Grindle goes to the birthday party of little Tom and the boy and his friends play a prank with Stitches, tying his shoelaces. Stitches slips, falls and dies. Six years later, Tom gives a birthday party for his friends at home and the clown revives to haunt the teenagers and revenge his death.

I have to admit, I never had heard of the comedian Ross Noble before I watched this movie. And I wouldn’t have been that intrigued by him, if I hadn’t seen him perform live. Actually that means he opened the Frightfest and introduced Stitches a day later to the audience. The fact that he was talking about his movie made me believe he was the director. He got me fooled (met the real director too, a really nice guy) and maybe some others too.

But back to this movie, that is a real fun little horror movie, that plays with the fear of clowns. Some have a real phobia, those shouldn’t watch this movie of course. Or if you are easily offended (be it by violence or nonpolitical correctness) – don’t watch. Everyone else: Jump on the the train and have fun during the trip. 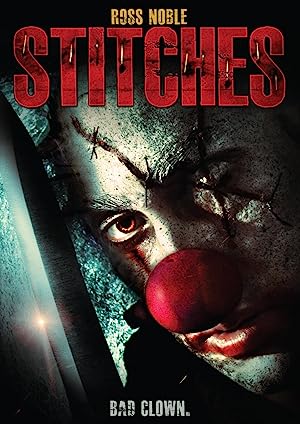 Be the first to review “Stitches 2012” Cancel reply