June 1940. German troops are advancing on Paris. Odile, a widowed teacher, succumbs to the widespread panic and, with her two children, joins the exodus from the city. Philippe is on the cusp of adolescence, Little Cathy knows only that they are going South. After fifty kilometres, a German plane attacks, decimating the helpless refugees. Odile and her children lose everything. A shaven-headed youth appears from nowhere and leads them away from the carnage. His name is Yvan, he’s seventeen years old. Cut off from the rest of the world and living in confined quarters, Odile and Yvan find themselves confronted with their own desires

Even when he’s not in top form, Téchiné makes movies that tell you more per frame than just about anyone around. In this case, he’s using a screenplay that is just a little too glib, with a closing plot twist well beneath his league. But his handling of young actors is, as always, impeccable, and his ability to convey the confusion and uncertainty of life as it is lived, moment to moment, remains unsurpassed. The opening scenes of ordinary families fleeing Paris and being strafed on the open road by the Luftwaffe are masterful, haunting and, alas, still and always timely. And you get several of what you always come back to Téchiné for: unforgettable portraits of wholly unique and credible human beings.

The film has been poohpoohed in France and as a result may never make into a proper U.S. release. Compared to a lot of what does get hurled out into the art-house market here, “Les Egarés” is a towering masterpiece and, for all its manifest imperfections, needs to be seen by serious moviegoers everywhere. 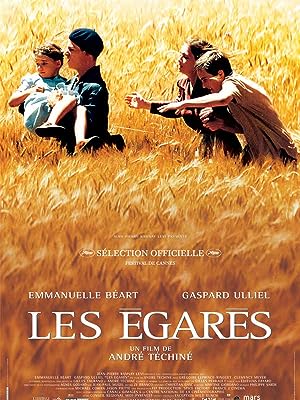