Set in the working class suburb of Hedley meet three very close and unique friends: neat freak Ben, tomboy Karly and drama queen Evie. For the first time, same-sex attracted lead characters. Through its coming-of-age narrative, Subject to Change will confront the harsh difficulties faced in suburbia by following these young adults as they deal with their complex and conflicting emotions. It will be a rocky road to love and inclusion through their final years of high school.

Are these the most sexualised and foul-mouthed kids on the planet?

The sexualities are pronounced…pity the story isn’t as in-your-face.

A pilot should grab you by the short n’ curlies, never letting go until the end credits roll.

Unfortunately, no curlies were snagged with this episode…less swearing, more verve 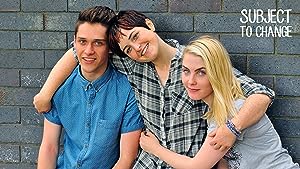 Be the first to review “Subject to Change 2016” Cancel reply