Mads and Kristian spend a summer weekend with their girlfriends at a summerhouse by the sea. When Mads and his girlfriend have a fight we find that Mads may love someone else more.

Into what should be an unnerving narrative, director Frank Mosvold of A Kiss in the Snow fame, delivers instead a tender tale that is as much a work of sun, sea and snaps, as it is of coming-of-age.

For well aware that his yearnings for his girlfriend are paling in the background when compared to his burgeoning feelings for his best friend Mads, Norwegian teen Kristian jumps at the opportunity to spend extra time with the object of his affection over a summer break along the sun-drenched shores of a nearby lake. Only Mads is having problems of his own, as rumours are rampant that his girlfriend may not have been true to him at a local party.

Determined to enjoy their weekend nonetheless, both couples are soon to be found sampling the amenities to be had at their lakeside lodge, along the way doing with the youth of the day do best. For they swim, they smoke and boy do they drink, inparticular Mads who is soon to be seen the worse for one drink too many. Only in seeing his best friend safely to bed, Kristian seemingly cannot stop himself from looking at Mads’ half naked body, let alone from proceeding to caress his bare chest with his hands and lips, before heading south to explore down below. Come the morning however, Mads is nowhere to be found. As a frantic search begins, Kristian eventually finds Mads lost in thought; after all he was asleep last night – wasn’t he?

As one of the more famous gay short films to originate from Norway, this seductive relationship drama is played with a natural feel by a young cast, knowledgeable of the fact that the sequence in which Kristian knowingly takes advantage of his drunken friend, is as voyeuristic, as it is the homoerotic lynchpin of the piece. And yet this short does not end as you might expect, given like the Spanish feature Krámpack aka Nico & Dani, it showcases how two close friends come to realise that their sexual identities lie at opposite ends of the Kinsey scale. Laced with a series of picturesque shots of the coastline, this is tale of a teenage crush, literally taken – a touch too far. That it remains sweet, rather than bitter, is to Mosvolds’ credit. 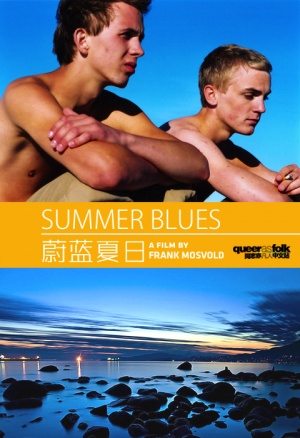 Summer Blues (2002)
25 min|Drama, Short|14 Jun 2003
6.4Rating: 6.4 / 10 from 239 users
Mads and Kristian spend a summer weekend with their girlfriends at a summerhouse by the sea. When Mads and his girlfriend have a fight we find that Mads may love someone else more.
Director: Frank Mosvold
Creator: Frank Mosvold
Actors: Kristoffer Berre Alberts, Hanne Bach Hansen, Tord Vandvik Haugen, Julia Schacht

Be the first to review “Summer Blues 2002” Cancel reply