Liam is a young, restless teen struggling to realize his dream in the gritty and dismal streets of Greenock, where unemployment is rampant and little hope is available to the city’s youth. He is waiting for the release of his mother, Jean, from prison where she is completing a prison term for a crime that her boyfriend actually committed. Her boyfriend, Stan, is a crude and obnoxious drug pusher is partnered by Liam’s equally rough and foul-mouthed, mean-spirited grandfather. Liam is determined to rescue his mother from both of them, which means creating a safe haven beyond their reach. But first he’s got to raise the cash–no small feat for a young man. It’s not long before Liam and his pals’ crazy schemes lead them into all sorts of trouble. Finding himself dangerously out of his depth, Liam knows he should walk away. Only this time, he just can’t let go.

As someone who comes from Greenock originally, my first draw to this movie was curiosity. Having said that, I fell completely for the story of Liam. His character, played by Martin Compston, could be one of many lads that I grew up with. The need to be ‘one of the big boys’ an all prevalent force in this deprived, former shipbuilding town; even if that need is self destructive. The performances are stellar throughout, only the mother’s character is weak. I am unsure if this is deliberate, or bad acting. Perhaps the film could have explored the lack of employment and the sectarian divide more, however it does tackle the drugs issue very well indeed. The other thing that may put people off is the language. There is nothing unusual about the frequency or the strength of it for Grenockians. But it is more usual for a filmmaker to give an essence rather than soak the audience in every single word. 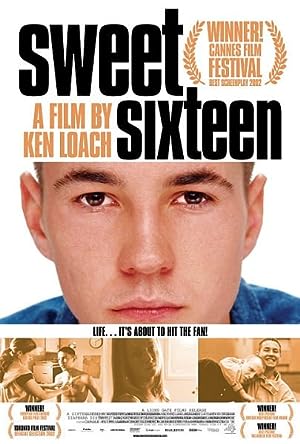 Sweet Sixteen (2002)
106 min|Crime, Drama|04 Oct 2002
7.5Rating: 7.5 / 10 from 12,015 users
Determined to have a normal family life once his mother gets out of prison, a Scottish teenager from a tough background sets out to raise the money for a home.
Director: Ken Loach
Creator: Paul Laverty (screenplay)
Actors: Martin Compston, William Ruane, Annmarie Fulton, Michelle Abercromby

Be the first to review “Sweet Sixteen 2002” Cancel reply