A biker’s brother is killed while investigating the kidnapping of a young boy, the byproduct of a war between two crime families. The biker vows to get revenge by finding the kidnapped boy and destroying the two families.

Incestuous bedfellows, Umbeto Lenzi and Tomas Milian team up again for the bellicose Cops an’ Robbers mash up ‘ Sydicate Sadists’, while this isn’t on par with the legendary sleaze-fest ‘Almost Human’ it still manages to deliver the requisite amount of gonzoid thrills an’ spills that fills chat rooms far an wide with gibbering fan boy praise. Plot adheres rigidly to formula; with Milian playing ex-cop biker, Rambo! whose penchant for revenge is most apropos since he is given ample opportunity for bullet spattered, jaw-cracking retribution after he discovers his brother has been killed; which engenders some relentlessly gritty crime funk grooves by veteran Franco Micalizzi, nutbag bike chases, and all manner of ubiquitous Italian crime overkill. All in all ‘Syndicate Sadists’ is an entertaining, exploitative riff on, Dashiel Hammet’s Red Harvest, and Lenzi/Milian heads are unlikely to be disappointed, although it doesn’t quite live up to its blood an’ thunder moniker. 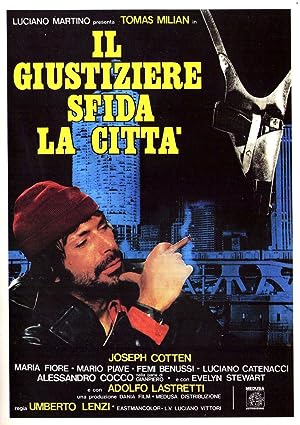