Home » Non-English with Subtitles » The Annunciation 1984 with English Subtitles

The Annunciation 1984 with English Subtitles

Angyali üdvözlet, aka “The Annunciation”, is a surreal account of the history of humanity as portrayed entirely by children between the ages of 8 and 12. The film begins with the biblical story as Adam (Péter Bocsor) and Eve (Júlia Mérö), are deceived by Lucifer (Eszter Gyalog) — three very photogenic leads — into tasting the “Forbidden Fruit”. They are thus chased out of the Garden of Eden by the Angel of Death and, in a vision, sent on an existential journey through western European history.

Always followed closely and influenced by the deceptively sweet, but contemptuous Lucifer, we follow Adam through The Plague, wars, Byzantium’s wretched cripples, the French Revolution, the squalor of Dickensian London, and a final return to the scene of the crucifixion. Of course the picture makes a case for its premise — that of the consequences of Original Sin — yet does so in a very unique way. In the closing scene, Lucifer says, “Why did I strive to achieve greatness in man, who is…in knowlege a pygmy, in blindness a giant?” This reflects the somewhat nihilistic view of a nation still under the boot of Soviet communism.

This rare movie may be one of the best (and only child-starred) art films ever.

The Annunciation is a film which you should watch when you have nothing better to do on an otherwise humdrum day. From the first to last this movie is a kaleidoscope of images, created to mesmerize the mind. Director Andras Jeles uses child actors to weave a visual tapestry of Godly virtues and human weakness intertwine with historical events. Somewhere between the Creation of Man and his Redemption, the viewer is set adrift in a sea of spectral images, who’ purpose is known only to the director or to Pablo Picasso. Despite some provocative moments such as baring all with a nude Adam and Eve, the collage of words and historical settings the film overwhelm the viewer and destroys what little message the director intended to impart. From a Western point of view this film is far too complicated to be easily absorbed and thus fails to be recognized as anything but an art form gone mad. 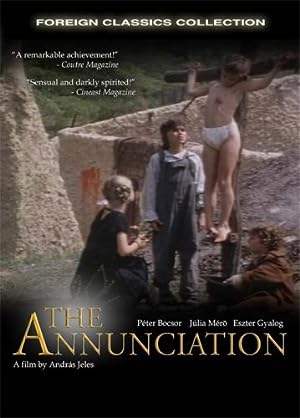 Angyali üdvözlet (1984)
100 min|Drama|20 Sep 1984
7.1Rating: 7.1 / 10 from 371 users
When Adam and Eve having succumbed to Lucifer's temptation, are cast out of the Garden of Eden, Adam holds Lucifer to his promise, reminding him that "You said I would know everything!". So…
Director: András Jeles
Creator: András Jeles, Imre Madách (play)
Actors: Péter Bocsor, Júlia Mérö, Eszter Gyalog, György Belme

22 reviews for The Annunciation 1984 with English Subtitles