Cole (Judah Lewis) is madly in love with his babysitter (Samara Weaving) Bee. She’s hot, funny, and popular. One night, in a moment of defiance, Cole secretly stays up his bedtime to discover she’s actually a cold-blooded killer who’s in league with the Devil. He now must spend his night evading Bee’s band of killers who will stop at nothing to prevent Cole from spilling their dark secret. It’s up to Cole to survive the night (and blow up a few people along the way).

Let’s start off by saying that this movie will in no way win any awards (apart from maybe a teen choice) or win over the hearts of audiences that are already skeptical to the legitimacy of the genre, but if nothing else, it’s a bloody fun ride (pun intended).

The story is simple enough, twelve year old nerd crushing on his super attractive babysitter, babysitter turns out to be a murderous psychopath, nerd’s gotta get the hell out of dodge, let the games begin! The kills are surprisingly inventive so gore hounds can rest easy in the knowledge that they wont be short changed in that respect. The performances are all decent enough but the stand outs for me have to go to Samara Weaving as the murderous babysitter, a role she clearly relished and had a ball playing, Judah Lewis as the unfortunate victim who delivers a charming and at times rather amusing performance, and Emily Alyn Lind as the young boy’s sweet and loyal friend who impresses with her understated portrayal that convinced me that there may just be bigger and better things for her on the horizon.

Overall, If you’re looking for an hour and a half to kill then there’s definitely worse ways. An enjoyable gore fest that delivers mostly what you’d be expecting with nice tension filled set pieces and a bonkers yet strangely touching finale thrown in for good measure. 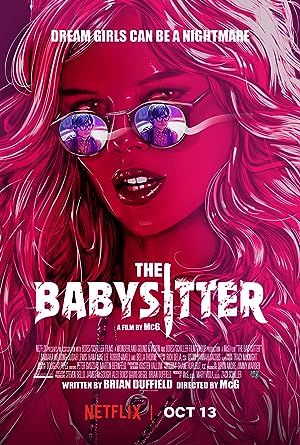