Justin Lo makes his feature film debut as Charlie Conrad, a 19-year-old history buff with the world on his shoulders. Following the death of his mother, Charlie sets aside his college plans to raise his highly imaginative 9-year-old brother Ben (Booboo Stewart). Isolated from his peers, Charlie accepts his responsibility yet secretly yearns for the freedom and romance associated with youth. Charlie suddenly gets his chance when he meets Jordan Rivers (Nick Bartzen), a charismatic drifter and fellow lost soul. The two of them hit it off immediately, and they soon embark on a tumultuous romance that gives Charlie a taste of the freedom he’s been craving. Just as their relationship intensifies, however, Charlie’s long-absent father, Doug (Barry Shay), returns to town with his own plans to take care of Ben. Caught in a struggle for Ben and eager to hold on to Jordan, Charlie must finally search his soul and make momentous decisions regarding the future of his family.

A delightful coming of age LGBT film by Justin Lo. It’s about Charlie Conrad a 19-year-old who takes care of his bright 9-year-old brother Ben Conrad after their mother’s death. Everything changes after he meets Jordan Rivers they begin a personal close relationship. Just when their relationship starts to build up. However, when Charlie’s father Doug Conrad shows up he wants to take care of Ben and everything heats up.

This was very touching. 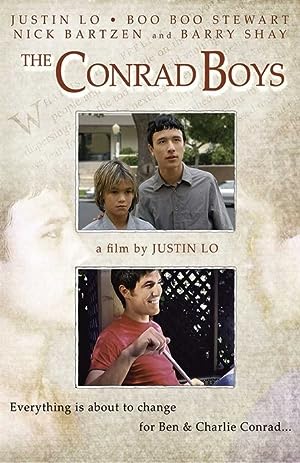 Be the first to review “The Conrad Boys 2006” Cancel reply