Dexter, age 11, who has AIDS, and his next door neighbor Erik, a little older and much bigger, become best friends. Erik also becomes closer to Dexter’s mother than to his own, who is neglectful and bigoted and violently forbids their friendship upon learning of it. When they read that a doctor in distant New Orleans claims to have found a cure for AIDS, the boys leave home on their own, planning to float down the Mississippi river and find him.

Here’s a film about and enacted by two children. Although there are adults in the film, they are there to add some authenticity, drama and, at times, comedy relief. The younger of the two boys, Dexter (Joseph Mazzello) is dying of AIDS; the older boy, Eric (Brad Renfro), is something of a sociopath. A lad of the South, Eric lives with his divorced mother in an unidentified city in the upper reaches of the Mississippi River (St. Paul, Minneapolis?). His innate hostility coupled with his marked southern accent does little to endear him to his peer group. So Eric is something of an outcast and has few friends…until he meets his next-door neighbor. He and Dexter become fast, though tenuous, friends. The friendship solidifies as the story segues into a quest for an AIDS cure which takes them on a Tom Sawyer trek down the Mississippi River with lots of adventures. One later scene, which will be thought of as emotional and something of a tear jerker, is truly uplifting and brings to the fore the true theme of the film. A first time effort by director Peter Horton, its theme was not one to garner any great box-office success. But it is well worth a video rental. (Brad Renfro, by the way, proves that his brilliant performance in The Client was not a fluke. And he did it without Tommmy Lee Jones & Susan Sarandan). 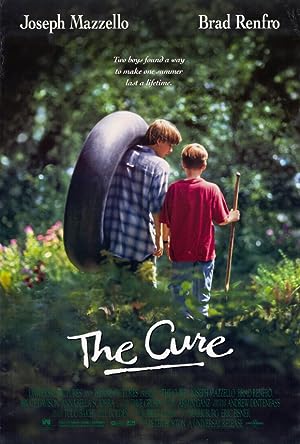 The Cure (1995)
97 min|Drama|21 Apr 1995
7.7Rating: 7.7 / 10 from 8,594 users
Erik, a loner, finds a friend in Dexter, an eleven-year-old boy with AIDS. They vow to find a cure for AIDS together and save Dexter's life in an eventful summer.
Director: Peter Horton
Creator: Robert Kuhn
Actors: Brad Renfro, Aeryk Egan, Delphine French, Mona Powell