The Devil’s Backbone 2001 with English Subtitles

It is 1939, the end of three years of bloody civil war in Spain, and General Franco’s right-wing Nationalists are poised to defeat the left-wing Republican forces. A ten-year-old boy named Carlos, the son of a fallen Republican war hero, is left by his tutor in an orphanage in the middle of nowhere. The orphanage is run by a curt but considerate headmistress named Carmen and a kindly Professor Casares, both of whom are sympathetic to the doomed Republican cause. Despite their concern for him, and his gradual triumph over the usual schoolhouse bully, Carlos never feels completely comfortable in his new environment. First of all, there was that initial encounter with the orphanage’s nasty caretaker, Jacinto, who reacts even more violently when anyone is caught looking around a particular storage room the one with the deep well. Second, and more inexplicable, is the presence of a ghost, one of the former occupants of the orphanage named Santi. Not long after Carlos’ arrival, Santi latches onto Carlos, badgering him incessantly at night and gloomily intoning, “Many of you will die.” As if that wasn’t enough to keep the orphanage’s occupants in an unrelenting state of terror, there’s the un-exploded bomb that dominates the orphanage’s courtyard, still ticking away; With the orphanage left defenseless by its isolation, and the swift progression of Franco’s troops, the ghost’s prediction seems depressingly accurate. Nevertheless, with every step of the plot, it becomes apparent that the ghost’s predictions as to who (or what) will die, the real source of danger and even the definition of death itself may be more ambiguous than first thought.

This is not just an incredibly effective ghost story, but a cinematic masterpiece. Like his “Cronos,” Del Toro has created a rich horror fable that is driven by 3-dimensional characters involved in a fascinating plot that leads to a wholly satisfying ending. With many developments along the way that shock, move, and thrill. And of course the political allegory and reality of the film, the Spanish Civil War, all the orphan boys of noble Loyalist fighters fighting their own war against a truly horrifying fascist villain, the young and handsome Jacinto, who is not without a sad ghost in his own past that feeds his destructiveness.

Del Toro is one of the most intelligent and humane directors working today, not something usually said about auteur in the horror genre. I have not seen “Hellboy” but think less of his US endeavors than these two Spanish masterworks… 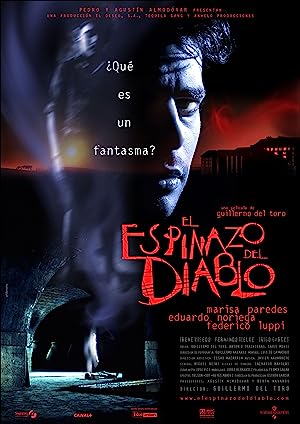