All fourteen-year-old Robbie Hendrick ever wanted was a family. Yet as another Mississippi summer begins, his wayward mother has run off again fearing a breakdown and he’s left to burn the days caring for his half brother, Fess. As the deep days and nights pass without her return and with older brother Lucas dangerously in their lives again, Robbie must face the fact that his dream of a family may only be a dream and he might just lose the only family he’s ever had: Fess.

i think mic from canada took almost all the words out of my mouth and my review but i must still highly recommend this movie, it is an excellent piece of independent film making. the main character, a 14-year-old boy, is very convincing and william patrick ruffin has real acting potential. he gives us a sensitive performance of a troubled emotionally lost young man. basically robbie is a good decent boy who tries to cope with a hard life and who tries to act as an adult and a parent to his kid brother though he is still himself a child who would like to play and enjoy his summer holiday if things would be otherwise. but he simply cannot do same things other teenagers do because his mother has gone somewhere leaving him and his little brother with their grandmother who is of little help to robbie. so the boys must take care of themselves. a no-good older brother complicates their life and robbie must do a difficult decision.

like mic says this is not a perfect film but i can still recommend it with all my heart. the film is just a little over hour long but it rewards the viewer. i honestly think so and thats why i stand behind my recommendation… 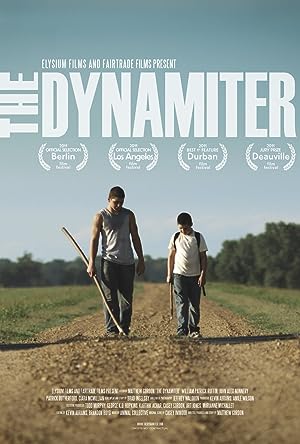 Be the first to review “The Dynamiter 2011” Cancel reply