The Einstein of Sex 1999 with English Subtitles

The life story of Dr. Magnus Hirschfeld, a German Jew, who as a physician established the field of sexology, and fought militantly against German anti-sodomy laws in the late 19th century. The script reveals main characters in Hirschfeld’s life including impossible love interest Baron von Teschenberg, and Hirschfeld’s aids- young Karl Giese and guardian angel, the transvestite Dorchen, as they establish the First Institute of Sexual Sciences in Berlin in 1920, and follows their struggles to keep it open, up to the rise of the Third Reich in the mid 1930s.

This film plays like community theatre on over-lit digital video. Don’t you hate it when a worthy topic is wasted on a bad film? Overacting, a trite script, distracting voice-over, two dimensional characters and editing out of Film 101. It was a struggle to watch through to the end.

If you still want to rent this you can watch the documentary on the DVD where you will meet the director Rosa van Praunheim who will tell you how famous, wise, and intellectually and sexually experienced he is. And he’s serious.

That said it is an important true story of the first sexologist who fought for the rights of what is now called the queer community. 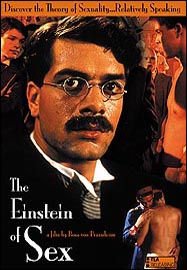