Home » Non-English with Subtitles » The Embalmer 2002 with English Subtitles

The Embalmer 2002 with English Subtitles

Peppino is an aging taxidermist constantly ridiculed for being short and somewhat creepy. He meets Valerio, a handsome young man fascinated by Peppino’s work. Peppino, in turn, becomes entranced by Valerio and offers him a large salary to come work as his assistant. But when Valerio meets Deborah, their fledgling romance is threatened by an insanely jealous third wheel.

The writing team of Matteo Garrone, Massimo Gaudioso, and Ugo Chiti won a David (Italian Oscar) for their screenplay, just as they would this year for the multi-award winning film Gomorra.

Peppino (Ernesto Mahieux) is an aging, somewhat creep, short person, who finds Valerio (Valerio Foglia Manzillo) and is instantly attracted to him. He offers him a job in his taxidermy shop.

When Valerio meets Deborah (Elisabetta Rocchetti), complications develop. Peppino has been bringing home a string of prostitutes to keep Viterio happy until he manages to land him.

There becomes a duel between Peppino and Deborah for the body of Valerio. Rocchetti (Do You Like Hitchcock?) is sensuous, and determined – perfect for the role. Peppino is the star, however, and dominates every scene he is in.

You are always wondering who will win, and the odds have to go to Peppino because of his mob connections.

The film takes place at a lot of resort areas and is captivating. 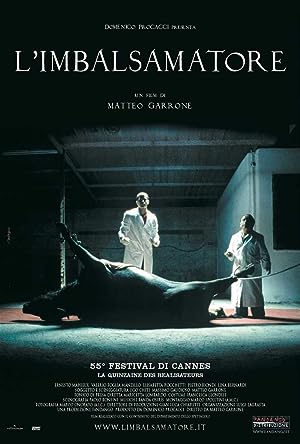