The Falls is a feature film about two missionaries that fall in love while on their mission. RJ travels to a small town in Oregon with Elder Merrill to serve their mission and teach the words of Joseph Smith. Living together and sharing the challenge of leaving home, the two men help each other discover their strengths. They share a passion for their faith and learn to express their feelings, risking the only community they have for a forbidden intimacy.

At the time of writing, “The Falls” has an IMDb rating of 5.6, which in my experience means the movie is barely worth a watch. Fortunately I ignored that score and had the pleasure to watch it last night. The two main characters are beautifully sweet. We get an insight into the strange world of the Mormons – two young men sent off on their mission to spread the word. It was interesting perspective, I wondered if many of the scenes of the missionaries being brushed off (as we all tend to do), were in fact real.

In any case, the main story is about the developing bond between the two young men, while trying to disguise the fact that one fancies the other a bit more than just a missionary brother.

Much of the soundtrack uses a slide guitar, which gave it a bit of a Brokeback Mountain feel. It does set the mood however, which I found lovely. I think the texture of the film perfectly captured that feeling of young romance.

There are some funny and wonderful scenes while the missionaries try to convert a down and out pot smoking honourably discharged war veteran.

The lead actors are very good and the pace of how things unfold means there is never a moment where you think the movie is slow. As the film drew to a close I did not want it to end. This is definitely one of the better gay themed movies I have seen recently. 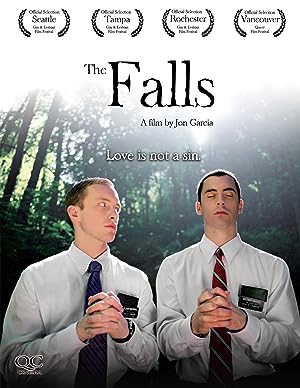 The Falls (2012)
91 min|Drama, Romance|N/A
6.4Rating: 6.4 / 10 from 1,886 users
The Falls is a feature film about two missionaries that fall in love while on their mission. RJ travels to a small town in Oregon with Elder Merrill to serve their mission and teach the …
Director: Jon Garcia
Creator: Jon Garcia
Actors: Nick Ferrucci, Benjamin Farmer, Brian J. Saville Allard, Quinn Allan

Be the first to review “The falls 2012” Cancel reply