A soldier introduces himself to the Peterson family, claiming to be a friend of their son who died in action. After the young man is welcomed into their home, a series of accidental deaths seem to be connected to his presence.

Motion Picture Rating (MPAA)
Rated R for strong violence, language, some drug use and a scene of sexuality

The acting is great, the soundtrack fantastic and the atmosphere the movie creates sucks you in from the very beginning. The movie keeps you guessing throughout at least for the first hour or so. You KNOW something is off but you have no idea what exactly. When I watched it my theory of what was going on changed every 10 minutes ? As the last reviewer stated the first hour is definitely the best part. Unfortunately towards the end the writers kind of dropped the ball. The ending is somewhat unsatisfactorily predictable and the story can only go the way it goes because of absolutely ridiculous mistakes made by some of the characters. I don’t know why most movies foam in the endings but I guess in this case it is something that I’m very willing to endure for the fun I had during the first 2/3 of the film.

The acting is awesome for the most part. Dan Stevens does a great job keeping you on the edge the whole time which is utterly entertaining. The writing and dialogue are great except as mentioned above for the somewhat disappointing ending. But all in all this movie stuck with me and though it has been a couple of days since I watched it I still “feel” the atmosphere it created (to a great extend due to its unconventional soundtrack, which I eventually bought although it is generally not my kind of music at all). This is a very good movie and I am a little surprised that I basically had to stumble over it by accident and it hasn’t gotten more publicity. If the ending had been a little different it could have been fantastic, none the less this way it is still great. 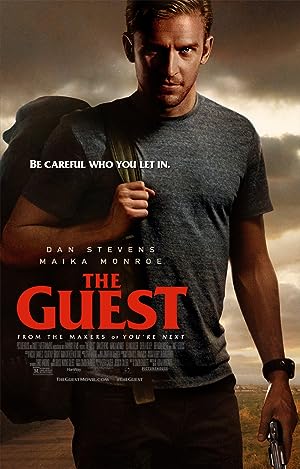 The Guest (2014)
100 min|Action, Crime, Horror, Mystery, Thriller|05 Sep 2014
6.7Rating: 6.7 / 10 from 81,857 users
A soldier introduces himself to the Peterson family, claiming to be a friend of their son who died in action. After the young man is welcomed into their home, a series of accidental deaths seem to be connected to his presence.
Director: Adam Wingard
Creator: Simon Barrett
Actors: Dan Stevens, Maika Monroe, Brendan Meyer, Sheila Kelley

Be the first to review “The Guest 2014” Cancel reply