The Here After 2015 with English Subtitles

On returning home to his father and younger brother after serving time in prison, teenager John is looking forward to starting new life again. However, members of the local community can’t forgive him killing his ex-girlfriend. John’s presence brings out the worst in everyone around him and a lynch-mob atmosphere slowly takes shape. Feeling abandoned by his former friends and the people he loves, John loses hope and the same aggression that previously sent him to prison starts building up again. Unable to leave the past behind, he decides to confront it.

John has committed a crime but being a juvenile he is only sent away to detention for two years. On his release he returns to his home, father and younger brother Filip. The crime he has committed is one that is too much for the local community and more over his school companions to bear with whom he wishes to remain. This is a community long on memory and short on forgiveness.

Things change when he meets a new girl who has, seemingly, been untouched by his past behaviour and it looks like he might get a second chance. What follows is the slow creeping to the inevitable and desperate acts of a community and family in crisis.

Now that is really well made the acting is excellent and the production values are really high too. It is the story that pulls you along but that only works because the acting is soo convincing and compelling. This is one that is easily recommended to anyone who likes Nordic Noir or even a good teen drama. 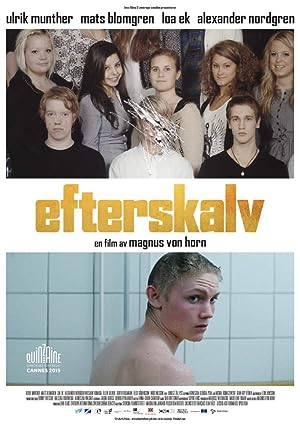 The Here After (2015)
102 min|Drama|09 Oct 2015
6.5Rating: 6.5 / 10 from 1,155 users
When John returns home to his father after serving time in prison, he is looking forward to starting his life afresh. However, in the local community his crime is neither forgotten nor forgiven.
Director: Magnus von Horn
Creator: Magnus von Horn
Actors: Ulrik Munther, Mats Blomgren, Ellen Jelinek, Loa Ek

1 review for The Here After 2015 with English Subtitles