Theo goes looking for someone who can tell him about his dad and the person he loved. His quest leads him into the Alps, where George has been living as a recluse for ten years. As they meet, the two men start to make sense of their lives.

The Hour of Living is not a film for everyone – I think that’s fair to say. But I think it’s a film worth seeing.

In the interests of full disclosure, I’ve been an admirer of director Sebastian Michael’s other work in theatre and performance since I saw him on the Edinburgh Fringe in 1997. And I’m one of the people who gave a little bit of money to the crowd fund that funded the film.

Even so, I was genuinely apprehensive about watching The Hour of Living because I was worried that the film would, you know, suck. Or be amateurish. Or so arty that I couldn’t stand it. Because, frankly, all of the above would be awkward.

I needn’t have worried. I genuinely enjoyed The Hour of Living with the proviso that it’s a film that’s not for everyone. Something that you might detect in the other review here on IMDb.

What I love about The Hour of Living is it’s both theatre and a film. Scenes play out languidly with characters talking at length (I’ll get back to that in a moment), often as two-handed scenes. It’s more at home in a play and not remotely visual. But what The Hour of Living does is take that theatrical scene and play it out in scenes that are visually gorgeous. The Swiss alps have rarely been rendered so beautifully on film. Every pixel of digital video whether looking at a mountainous vista or Sebastian Michael’s own craggy face in close-up or food being prepared is gorgeously composed and shot. The result is unnervingly counter-intuitive for film: It’s non-visual but visual at the same time. In essence, you have pretty things to distract you from the fact people are, yes, talking for a long time.

But what are they talking about? For me the subtlety of how that question is explored is really quite beautiful. At it’s core, The Hour of Living is about two people mapping out the height and breadth of something that’s been absent from their lives– for one a father, for the other an object of love. Neither know how to define that absence. They explore it in many ways– through anger, through sadness, through silence– but in the end they’re drawn to that absence like a tongue to a missing tooth. And so they talk until such talk peters out and then they eat or walk and talk some more.

It is, I suppose “adramatic”, if such a term could be said. It doesn’t build to easy resolution but rather just decides when it’s ready to resolve. That is really not to everyone’s taste. But I adore it.

The reason it works for me is the performances by Sam Fordham and Sebastian Michael. They’re understated but disarmingly honest. There’s a beautiful scene when (no spoilers) Michael’s character tries to explain the nature of depression and it’s not showy or histrionic, it’s just unbelievably matter of fact. And I have to say I was terribly moved by that precisely because it was so matter of fact. Fordham has the harder job of being young and impatient and trying to define the world on his terms and, sometimes, succeeding at it in the way only the young can. Fordham is beautifully playful as Theo. Flirtatious but un-self- conscious about it. He’s an actor to watch out for.

And there’s this ensemble of quirky characters surrounding the film’s central quest that add a lot of laughs before it shifts into its quieter second half. I loved Charlotte Heinmann as Gabrielle, who stole the first 20 minutes or so and probably committed petty larceny on several other films while I wasn’t looking.

The Hour of Living is not for everyone. It’s not even the sort of film I would probably seek out. But I was happy I watched it. It’s experimental to be sure– the editing is fashioned more like a series of fugues– but it’s also genuinely trying to do something different with the medium of film and when it succeeds it is quietly, achingly, beautiful. 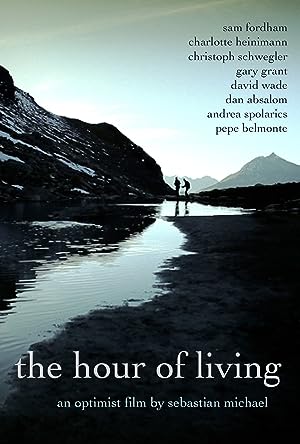 The Hour of Living (2012)
112 min|Drama|06 Jun 2012
7.2Rating: 7.2 / 10 from 22 users
Theo goes looking for someone who can tell him about his dad and the person he loved. His quest leads him into the Alps, where George has been living as a recluse for ten years. As they meet, the two men start to make sense of their lives.
Director: Sebastian Michael, Adam Berzsenyi Bellaagh
Creator: Sebastian Michael
Actors: Sam Fordham, Sebastian Michael, Charlotte Heinimann, Christoph Schwegler