The House That Screamed 1970 with English Subtitles

A strict headmistress runs a secluded school for wayward girls in 19th century France, whose students are disappearing under mysterious circumstances.

This rather rare film from the director of “Quien Puede Matar a un Niño” (better known as “Island of Death” or “Who could kill a child”, see also my comment on that) tells an intriguing and uncomfortable story about sinister things happening in a French boarding school around 1900. The acting is thoroughly outstanding, especially by Lilli Palmer as the head of the school, and John Moulder-Brown, her seemingly weak teenage son.

It is said that this mix of classic and modern horror that undoubtedly was years ahead of its time was Dario Argento’s inspiration for his own masterly “Suspiria”, and although the two movies are quite different in style, this seems to be undoubtedly true. The creepy atmosphere of the school, the uncanny characters of the women in charge: it’s all there already, only that Argento put the whole thing into a more extreme shape.

“La Residencia” is probably a little bit slow moving for today’s standards, but no time is wasted: The careful development of the characters make the viewer involved in all characters very soon, so one really cares about them when they reach their grisly demise. The film’s atmosphere is terrific, extremely creepy throughout the picture.

And there is also the topic of oppression: Palmer’s character is leading the school relentlessly; she knows no mercy for girls that are disobedient. But the oppression also works (in a far more subtle way) towards her teenage son, who has learned to obey his mother a long time ago.

One more word about inspiration: It seems to be, without a doubt, Juan Piquer Simon too was inspired by some elements of “La Residencia” when he made his overtly gory chainsaw-killer-film “Pieces” (“Mil Gritos Tiene la Noche” in spanish), although you can’t compare the two films.

This hard to find gem is highly recommended for all true fans of the horror film. 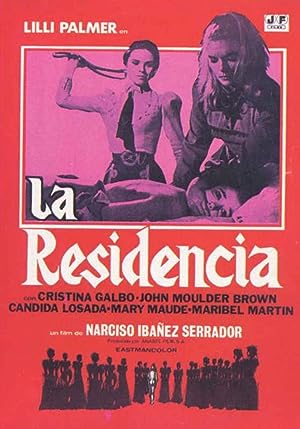