A dystopian thriller set in the year 2030 that sees the world in a permanent state of economic recession and facing serious environmental problems as a result of global warming.

In the distant future of 2030, global warming, nuclear meltdowns, and civil war have ravaged the United States, while a government agency known as The Humanity Bureau has been established to keep citizens in line. Slackers that aren’t productive enough, as determined by the Bureau’s agents, are packed up and sent to New Eden.

Of course, New Eden isn’t all it’s cracked up to be: it’s actually a cardboard box filled with your ashes, revealed to us early on when the bad guy is called in to meet with an even badder guy to discuss Humanity Bureau business.

“I had this shipped here to make a point,” the head baddie says as he slices into stack of shrinkwrapped boxes and thrusts his hand inside, coming out with a fistful of ashes and a child’s tooth. Point made…?

Nicolas Cage stars as Noah Kross, one of the Humanity Bureau agents that decides who is and isn’t a productive member of society and who gets shipped out to pasture. In the film’s opening scene, he calmly guns down a senior citizen at a motel who puts up some shotgun-fueled resistance.

“That guy was the former governor of Colorado,” friend and fellow agent Adam Westinghouse (Hugh Dillon) informs him. ‘Yeah… former,’ I imagine Cage’s cold-blooded killer chuckling to himself while accepting his new promotion.

But then Kross has second thoughts about all this New Eden business after shipping out single mother Rachel Weller (Sarah Lind) and her son Lucas (Jakob Davies), before he discovers that… gasp… Soylent Green is people. “What have we done,” indeed.

And after a meaningful recitation of the Pledge of Allegiance by Lucas – which took months of planning, we’re told, and which Cage’s Kross effusively praises – the next hour of The Humanity Bureau is Kross and the Wellers high-tailin’ it to Canada with Westinghouse and other Bureau agents on their trail.

And… that’s all there is to The Humanity Bureau. The plot outline of Logan, some of the desert wasteland landscapes from Mad Max or Blade Runner 2049, the themes of The Road, and some general dystopian influence by classics like 1984.

What’s missing, however, is the kind of budget to do anything on the scale of films like those. Despite the post-apocalyptic setting, everything feels resolutely contemporary, with costume and set design woefully lacking.

The one thing the movie does have going for it is stark location photography in Osoyoos and Oliver, British Columbia, cannily filling in for locations from the American southwest up to the border.

There is some campy joy to be had from certain sequences here, and while Cage is generally restrained throughout, his scenes with the young boy are especially… odd. But so much of The Humanity Bureau is driving, and waiting, and talking, and you’ll be lucky if you aren’t sleeping. 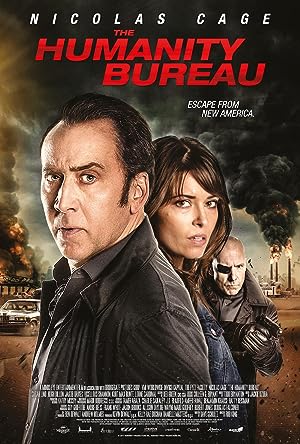 Be the first to review “The Humanity Bureau 2017” Cancel reply