Two men who have robbed a bank end up in a deadly pursuit of one another after one of them kills an innocent victim in attempt to steal the other’s half.

The Kid and the Killers was shot and originally edited by Irv Rudley. a cinematographer/Editor in South Florida. The film producer, Mr. Dan Ross, took the film to New York for distribution, where some hot shot editor convinced him to re-edit the film prior to distribution. This editor chopped the film up into a disjointed mess which was then not good enough to be distributed at all. What a shame! The cast and crew spent 10 weeks in the mountains of Columbia, South America, using mostly local crew, along with the technical crew from the US. They lived on a ranch, deep in the mountains, where they had soldiers for protection from the local bandits. In fact, on one return to the ranch from a distant location, higher up in the mountains, the prop truck was followed and almost attacked by a bandit band. The crew defended itself, with prop guns and blanks, from the truck. The views in those mountains were spectacular, and Mr. Rudley took every advantage of that fact throughout the film. 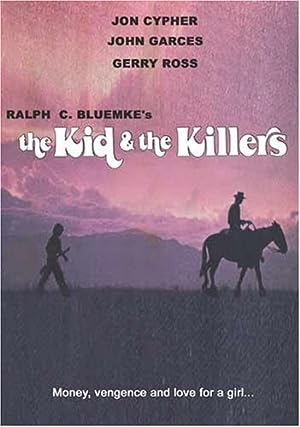 The Kid and the Killers (1974)
90 min|Adventure, Western|N/A
5.3Rating: 5.3 / 10 from 20 users
Two men who have robbed a bank end up in a deadly pursuit of one another after one of them kills an innocent victim in attempt to steal the other's half.
Director: Ralph C. Bluemke
Creator: Ralph C. Bluemke
Actors: Jon Cypher, John Garces, Gerry Ross, Elida Alicia