A band of kids embark on an epic quest to thwart a medieval menace.

Well January in film has pretty much come and gone and I have to say that I’m surprised that I’ve enjoyed most of the films that have come out this year thus far. Wasn’t really looking forward to this film that was a child friendly rendition of a modern day King Arthur but I gave it a go. Its really dumb at times as expected but is entertaining enough to warrant its own existence. I do hope to not have any more film adaptation of Arthurian legend for a while though.

The film is about a kid named Alexander who one day stumbles on the legendary Excalibur sword. This event unleashes Morgana, an enchantress who is looking to gain access to the sword. To stop her and her soldiers, Alexander enlists the help of an unlikely trio while receiving aid and guidance from the ancient wizard, Merlin. The film stars the son of Andy Serkis and the always gorgeous Rebecca Ferguson (except not when she transforms in this film).

The running length of this film is too long especially for a children’s movie. These types of films should clock in at a max of an hour and a half. The effects of the film were pretty decent and the characters were good enough to keep you watching their plight. Its a modern day re-imaging of the successor to the sword and the stone which I find the younger crowd could really enjoy.

There isn’t a whole lot of good or bad in this film, it meets its mark in the middle. Its an introduction to Louis Ashbourne Serkis, who I am sure we will see more of in the future. Also, its a chance to see Rebecca Ferguson who really needs to be in more things because she’s super great. Overall, don’t expect anything more than what the trailers show you but its a perfectly fine film that will go over well with the younger viewers. 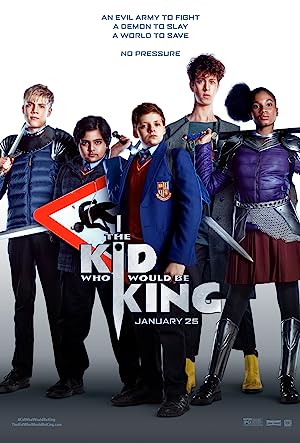