A 13-year old boy who lives with his single sick mom in a trailer near the beach, comes in contact with the father he never knew when the man performs as a conductor at the local music theater.

Alix Delaporte’s (“Angel and Tony”) The Last Hammer Blow is the story of 14-year Victor (Romain Paul, in an outstanding debut performance that earned him the Marcello Mastroianni Award for Best Young Actor at the Venice Film Festival) who has to muster all of his inner strength to deal with three blows of fate that have been thrust upon him. The title of the film is derived from the finale of Gustav Mahler’s Sixth Symphony written in 1903 which originally contained three loud drumbeats referred to as “hammer blows,” the idea of fate knocking three times. According to the composer’s wife Anna, it was the last of the three blows “which fells him as a tree is felled.”

After personal tragedy struck three times in 1907, Mahler removed the last of the hammer blows, leaving its inclusion optional for each conductor. Victor lives with his mother Nadia (Clotilde Hesme, “Le Souffleur de l’affair”) in a trailer park close to the beach in Montpellier, France. She wears a wig due to her treatments for cancer and the boy shaves his head as a gesture of connection. He is also captain of his soccer team and is encouraged by his coach (Farid Benali) to prepare for tryouts for a higher level but is distracted by his mother’s illness and his burgeoning interest in Luna, the teenage daughter (Mireia Vilapuig,Phoenix 11-23″) of the Spanish neighbors whose son he is tutoring.

Victor’s burden takes on an even heavier aspect when his estranged father, Symphony conductor Samuel Rovinski (Grégory Badebois, “One of a Kind”), comes to town to conduct the Sixth Symphony of Gustav Mahler, designated as ‘Tragic.” Upset that his mother does not have the money to restore their trailer for the winter, Victor overcomes his fear of rejection and comes to the concert hall to find his father at rehearsals. Unfortunately, at their first meeting, Rovinski, a burly man with little social grace, is less than welcoming and tells him that he has no son.

Although he agrees to give him 1,000 Euros, his mom refuses it, saying she does not want to have anything to do with him. Yet, the boy still goes back to the orchestra’s rehearsals looking for some show of affection and caring from the father he has never known. As their relationship slowly begins to develop, one of the most affecting moments takes place during a pizza lunch. Conversation is awkward since his father knows nothing about soccer and Victor knows nothing about music, yet he shares a dream with his dad about a football match, and Samuel talks to him about classical music.

Lending him two CDs with different interpretations of the Mahler work, he asks him to begin noticing what feelings and images come up for him. Through Victor’s exposure to the music, he begins to get more in touch with his feelings and his ability to communicate them, and Samuel also grows in his appreciation of the Symphony. The Last Hammer Blow is a short film, just eighty-two-minutes long, and all the loose ends are not neatly tied together in a package, yet it does not hinder the impact of the film.

The script, which Delaporte co-wrote with Alain Le Henry, contains all the elements for melodrama yet not only manages to avoid mawkishness but offers one of the most touching, heartfelt, and rewarding dramas of the year. Though it is not clear what each character really wants to happen, Delaporte does not force them in a particular direction, but seems to want them to determine their own path. “It’s a film,” she says, “about building one’s own life without parents, or without part of the family, how to live alone and how to build a future.” It is also about taking the small steps to growing up and learning to acknowledge yourself in the process – and smile. 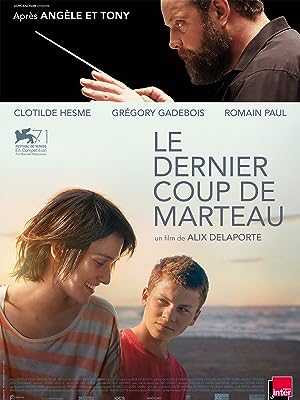 2 reviews for The Last Hammer Blow 2014 with English Subtitles