The young Timm Thaler lives in the 1920s with his father in a small alley of a German city. Even when he grows up in poor circumstances, he is happy, and he has a laugh that nobody can resist. This is so contagious and disarming that Baron Lefuet, the fierce Baron, wants to have it.

The simple facts about the movie are known now.

But the main plot does handle around the trading(and exclusion of people) and its results for the world and the character of humans… so secondary narcissism and a bit greed. 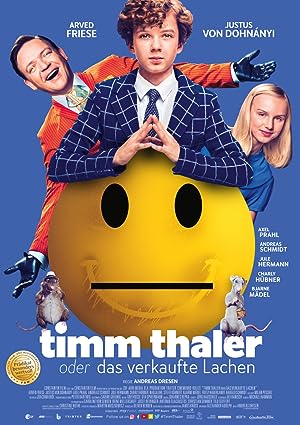 The Legend of Timm Thaler or The Boy Who Sold His Laughter (2017)
102 min|Adventure, Comedy, Drama, Family, Fantasy|02 Feb 2017
5.9Rating: 5.9 / 10 from 226 users
The devil tricks a little boy off his laughter in exchange for assured wins in all his bets. It depicts his journey after the deal with the devil, how he loses his soul bit by bit with each win.
Director: Andreas Dresen
Creator: Alexander Adolph (screenplay), James Krüss (novel)
Actors: Arved Friese, Justus von Dohnányi, Axel Prahl, Andreas Schmidt