Home » Movies in English » The Nail: The Story of Joey Nardone 2009

The Nail: The Story of Joey Nardone 2009

Tony Luke, Jr. stars as Joey Nardone, an out-of-shape boxer, who after 8 years in prison for an unfortunate accident leaves prison and gets a shot at redemption by fighting for one young boy’s future – 14 year old Jesus. Joey and Jesus begin a relationship that gives them both a new and inspired life with a purpose: to only “fight for the right.”

No Spoilers ahead…. Was on hand to see and enjoy “The Nail:The Story of Joey Nardone” in Philly today and without giving anything away, it hits all the marks as a powerful little character study. Philly’s son Tony Luke Jr. has acted in some movies but now he takes lead in a moving tale of a down and out ex-con trying to live his life with dignity and regret. A former Golden Gloves champ who did his eight years of hard time, Joey moves into the old neighborhood (changed into a horrible ghetto) and wants to return the old gym and help out his best friend Pete (Leo Rossi doing a fine turn as the world weary corner man). His next door neighbor is a monster lowbrow who beats his wife and teen son, Jesus. Joey saves Jesus from a scuffle with a nasty trio of local bullies, and they soon make a friendship. Joey finds a reason to grow as a person through teaching his young ward self defense.

“The Nail” is not a boxing movie, but “the sweet science” is a lesson in real life, and Joey is the teacher. He still has a lot to learn, and the audience goes along with the story as if they are hanging on the corner in South Philly, watching the world go by. This movie is as hard edged as any great classic from the 70’s like “Mean Streets”, no punches pulled. I have to say, the punch of this movie is crossing a sentimental street parable with brutal reality.

Director James Quattrochi from the Bronx brings his street sense to Philadelphia. With a low budget, and a passion for the tone of good film makers like John G. Avidson and Martin Ritt, he makes this an engrossing film on all levels. Producers Luke and Rossi are pouring it all out with casting locals and newcomer Paul Orrantia (a real talent)as Jesus. Tony Danza and Ray ‘Boom Boom” Mancini in support to give the movie spice and ring credit. William Forsythe as a good hearted goombah is welcome anywhere he goes. The star of the movie is Tony Luke and he is as real as a cheese steak and cheeze-whiz. It’s as much fun as watching Howard Stern play himself in “Private Parts”.

The down side is that “The Nail” does not give its audience credit for the story flaws. The bad guy is never punished or questioned by anybody, and why isn’t Joey living the life of an ex-con (no parole officer?). But if you can get past the budget and some script issues, you still will walk away satisfied. More to come for this team of professional indie-movie makers (and I hope soon). A technical KO! 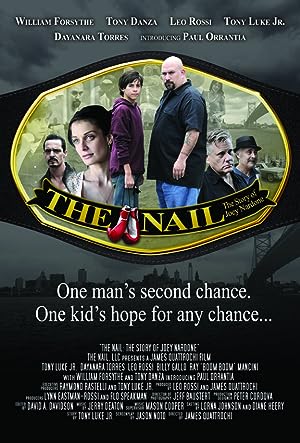 Be the first to review “The Nail: The Story of Joey Nardone 2009” Cancel reply