Home » Movies in English » The Nature of Nicholas 2002

The Nature of Nicholas 2002

The Nature of Nicholas is a surreal fable that follows twelve-year-old Nicholas as he struggles with an intense attraction to his best friend, Bobby. Nicholas is obsessed with his friend Bobby. Bobby’s feelings are less clear. At times he seems to share Nicholas’s fascination, but then appears more interested in making inroads with the girls at school. All this leaves young Nicholas very confused. When images of Nicholas’s absent father start to appear to him, the boy is understandably frightened. This curious figure gives Nicholas the impression he is pressing his young son closer to the girls in his life and away from Bobby. This only leads to increased anxiety and fear in Nicholas. Fearing that Bobby is drifting away from him, Nicholas takes a chance and kisses him. Bobby is taken aback and storms out. Because of his shame, Bobby undergoes a type of ‘splitting’ where a decrepit, ghoulish version of him is separated from his healthy self. Nicholas is immediately drawn to this gruesome Bobby, and begins to secretly take care of the creature. However, Nicholas cannot keep the creature hidden forever and must eventually face his own feelings.

What promised to be an interesting film of a young boy’s awakening sexuality ended up a plodding, messy story that meandered all over the place. When the movie ended, I was left wondering what exactly was the message? In a Q&A session after the movie, the director was asked what was the point of the film, but he didn’t seem to have an answer. The Canadian “pauses” did not add anything to the movie, other than stretch 20 minutes worth of story into a 90 minute film. On the positive side, the acting (especially Jeff Sutton as Nicholas) was very good and many shots looked beautiful. Unfortunately, this film is confusing and a major disappointment. 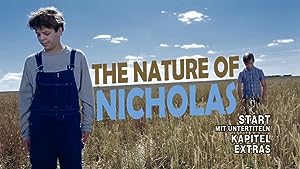 1 review for The Nature of Nicholas 2002